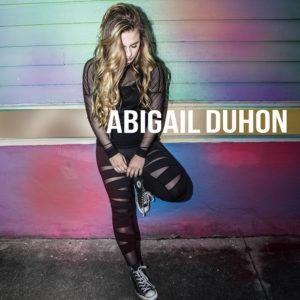 Abigail Duhon brings a hope-filled approach to life and music with her new album. Each of the six tracks has something to offer, from inspiration to celebration.

“Into The Light” expresses appreciation of the love God pours out on us. Duhon pictures Him asking her how deeply committed to His call she wants to be, and responds by choosing to follow Him as long as she can. There’s little instrumental clutter and a slightly tropical sound. “Rebound” is a comeback anthem that rejects fear in the face of pain, choosing instead to believe that we can bounce off of them and return faster and stronger than we were. “Dance Up”, featuring Spencer Kane, is a dance melody that mercifully focuses on inward joy rather than the less savory topics many dance songs do. Though God is not mentioned by name, His presence and power are alluded to (“The flame in my heart shining so bright/burning so hot and chase away the night/There’s something so loud, something so light/something I could never try to keep inside”)

With wise discernment, “Give Me More” details a longing for something beyond the lies that are being peddled to young people. Duhon is not satisfied with an empty lifestyle that won’t end well. She’s searching for the real deal, and we should be, too. In “I’m Not Ashamed”, she delves into more serious waters, declaring once and for all that if she ever had to risk it all to take a stand for God, she would. Bridged by a spoken prayer of commitment, this song is a pledge truly worth making. “More Than Gold” is a letter of hope to someone who is enduring the unthinkable and wants to end it all. Like the comforting hug of a friend, it assures the listener that they have worth beyond any object of value. I certainly felt love coming through the lyrics. It kind of feels like a response to “13 Reasons Why”.

Abigail Duhon’s music is a good mixture of light and heavy topics, handled in a way that feels authentic, like pages torn from a diary. Her message is a positive alternative to the lies being pushed by society today.