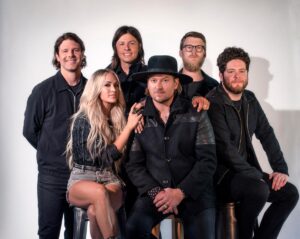 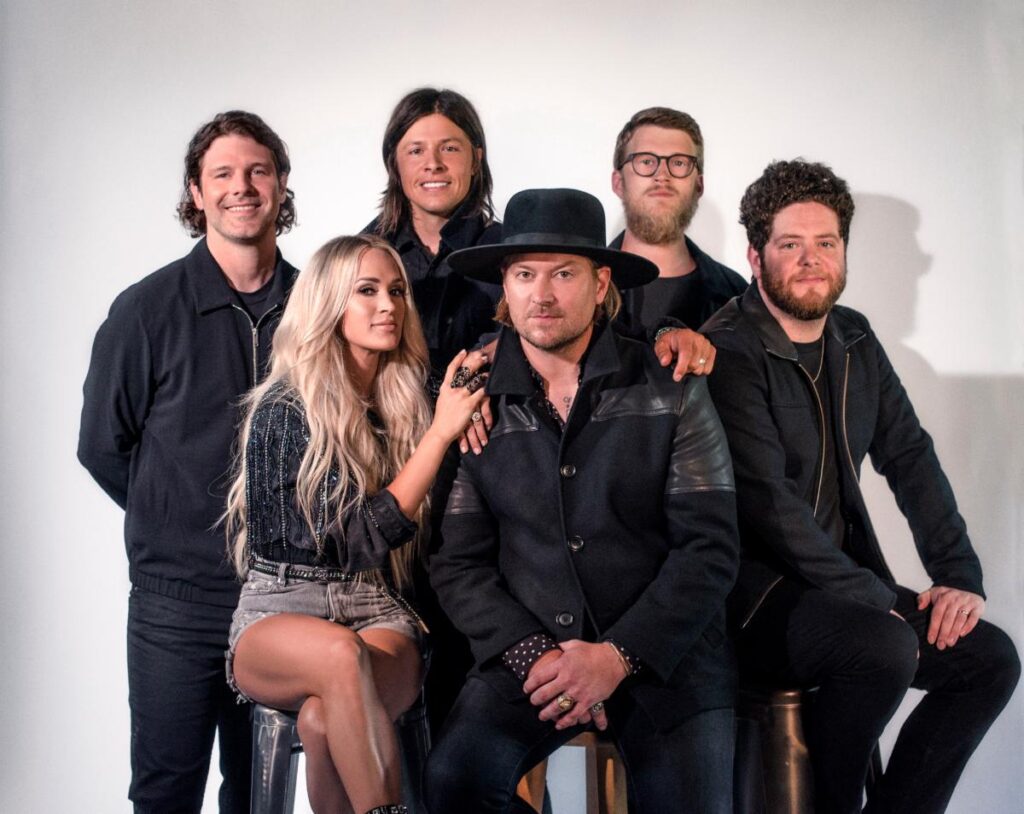 “‘I Wanna Remember’ is a nostalgic track and takes you back to the moments you never want to forget. We all came from small towns, and those roots have cemented into the fabric of the band and our music,” NEEDTOBREATHE shared. “Bear worked with Carrie on some of her recent projects, and we felt like her small town roots and humble beginnings were the perfect addition to this song. As soon as we got into the studio, we felt a connection with her as if she was a long time member of the band. Having someone with her talent and spirit sing on the song is an absolute honor for us.”

“I have been a huge fan of NEEDTOBREATHE forever and I was so honored when the stars aligned and Bear agreed to lend his incredible vocals to a song on my recent gospel album,” says Underwood.” “Needless to say, I was thrilled when he and the band invited me to be a part of their new project. I love the song and have had the best time getting to know and sing with these amazingly talented guys.”

“I Wanna Remember” will appear on NEEDTOBREATHE’s forthcoming studio album, Into The Mystery, which is due for release on July 30 via Elektra Records. The album is available to pre-order and pre-save starting today HERE. Limited edition merch offerings are available exclusively through NEEDTOBREATHE’s online store HERE. The band has also unveiled the album’s full tracklisting, which features additional collaborations with Jon Foreman of Switchfoot and Natalie Hemby of The Highwomen. Into The Mystery was announced earlier this month alongside the release of the album’s lead single and title track. The band also shared an accompanying music video that premiered on People.

Just as their critically acclaimed 2020 album Out of Body impacted audiences, NEEDTOBREATHE capitalized on a rush of inspiration and rode the wave of creativity. Without telling a soul, the band decamped to a historic house-turned-recording studio in Columbia, TN to begin working on new music. Over the course of three weeks, they resided under one roof, laughed during meals, explored their surroundings, and recorded together with co-producer and engineer Konrad Snyder and special guests. Out of this de facto creative hub and “extended summer camp,” they handcrafted an album reflective of the moment, yet independent of all expectations—even their own. For as intimate as the story may seem, they filmed every minute of it for an upcoming documentary entitled, Into The Mystery. Watch a teaser for the film HERE.

This Fall, NEEDTOBREATHE will embark on their massive Into The Mystery Tour with support from Switchfoot and The New Respects. The 38-city trek will visit iconic venues such as Denver, CO’s Red Rocks Amphitheatre and Los Angeles, CA’s Greek Theatre, and see the band perform their first-ever headline show at Nashville, TN’s Bridgestone Arena. The Into The Mystery Tour will kick off on September 7 in St. Louis, MO, and wrap on October 30 in Atlanta, GA. Tickets for all dates are available now HERE.

The past 12 months represent one of the most prolific periods in the band’s career thus far. They recently unveiled Live from the Woods Vol. 2—a live album recorded during three sold out, socially distanced outdoor concerts at Pelham, TN’s famed The Caverns. The band previewed the album with an appearance on CBS’s The Late Late Show with James Corden. Watch their interview and performance of “Alive” HERE. Meanwhile, Out of Body debuted in the top 5 across three Billboard charts, and received critical acclaim from Billboard, Spin, Southern Living, American Songwriter, Taste of Country, and more.

Into The Mystery Tracklisting
1. What I’m Here For
2. Into The Mystery
3. Sunshine
4. Carry Me (feat. Jon Foreman of Switchfoot)
5. I Am Yours
6. Chances
7. Sittin’ in the Back Seat
8. Give Me A Chance
9. Don’t Throw All the Good Things Away (feat. Natalie Hemby)
10. Innocence
11. I Wanna Remember (feat. Carrie Underwood)
12. West Texas Wind 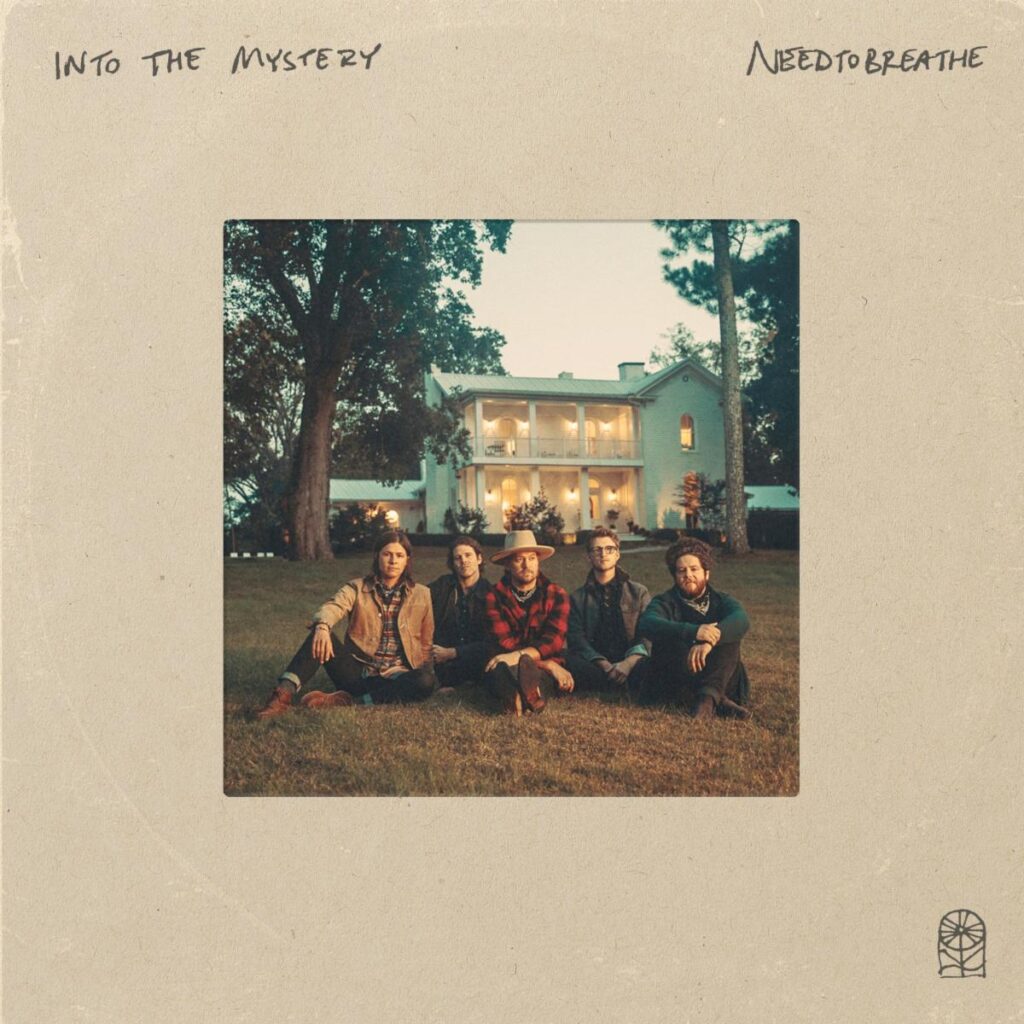 About NEEDTOBREATHE:
Since 1998, NEEDTOBREATHE have quietly emerged as a dynamic force in rock music, topping the charts, selling out historic venues, and generating hundreds of millions of streams to date. The band have gathered one platinum single, four gold singles, and a gold album. Along the way, “Multiplied” notched their first GRAMMY® nomination. Simultaneously, they performed to sold out crowds at arenas and amphitheaters coast to coast. In addition to garnering two nods at the Billboard Music Awards, they’ve attracted acclaim from People, Rolling Stone, Forbes, and many more. In 2020, they sowed the seeds for rebirth with Out of Body. It bowed in the Top 5 of three Billboard charts and reeled in acclaim. Within weeks of its release, the quintet—Bear Rinehart [vocals, guitar], Seth Bolt [bass, vocals], Josh Lovelace [keys, vocals], Randall Harris [drums], and Tyler Burkum [guitar]—stole away to an old historic house in Columbia, TN where they lived together, ate together, laughed together, and recorded together for three weeks in the fall of 2020. They returned home with their eighth album and documentary Into The Mystery [Elektra Records]. It’s the kind of record that could only be made by a band who has been through it all and still has enough faith to keep encouraging one another. It’s NEEDTOBREATHE.

About Carrie Underwood:
Carrie Underwood is a true multi-format, multi-media superstar, spanning achievements in music, television, film, and as a New York Times bestselling author and successful entrepreneur. She has sold more than 64 million records worldwide, recorded 27 #1 singles (14 of which she co-wrote), and has seven albums that are certified Platinum or Multi-Platinum by the RIAA, all while continuing to sell out arena tours across North America and the UK. All nine of her consecutive studio album releases (two of which she co-produced) from the beginning of her career debuted #1 on the Billboard Country Chart, making her the only artist to accomplish that feat. She has won over 100 major awards including 7 GRAMMY® Awards, 15 ACM Awards including three for Entertainer of the Year (the first female in history to win twice and the only female ever to win three times), 22 CMT Music Awards (holding the record for the most award wins ever for the show), 7 CMA Awards, and 15 American Music Awards. She has also built a successful business portfolio inspired by her passion for health and wellness, including her fitness and lifestyle brand, CALIA by Carrie Underwood, bestselling book, FIND YOUR PATH, her fit52 app, and a partnership with BODYARMOR Sports Drink. She recently announced her first-ever residency, REFLECTION: The Las Vegas Residency, at The Theatre at Resorts World Las Vegas, which will begin December 1.