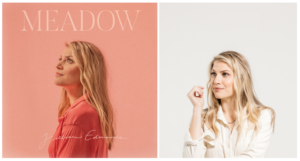 NASHVILLE, TENN. – (MAY 15, 2020) – Today singer/songwriter Jillian Edwards releases her new EP, Meadow, which gives the singer/songwriter the opportunity to once again wear her heart on her sleeve. With music ready-made for rest, solitude and comfort, Edwards invites listeners into a state of abiding on her new project, which is timely for the season the world currently facing.

Media are already falling in love with Edwards’ music as they have said she is an “anointed singer-songwriter” (NewReleaseToday) and that she is a “woman in the exact place God wants her to be” (Milk & Honey Magazine). She has also recently spoke with CCM Magazine, Digital Journal and others to come.

“I’ve always felt like God has given me a clear vision that music is what I’m made to do,” Jillian Edwards says. “I want to provide healing, and that for me comes in beauty. So that’s the heart of these songs. I really want them to be medicine for hurting people, and that’s everyone.”

About Jillian Edwards: For more than a decade, Edwards—who now resides in Nashville with her husband, Will, drummer for indie rock band Colony House, and their daughter, Willow Faye—has consistently written and recorded music through the lens of faith, even when she’s crafting songs about love and relationships or writing songs specifically for film and television. The latter has seen Edwards’ songs featured in television episodes of Nashville, Pretty Little Liars and Grey’s Anatomy, and on commercials for Citibank among other high-profile brands. In addition, a collaboration with EDM DJ Thomas Gold resulted in a surprise hit for the singer/songwriter with “Magic,” on which she is credited as a co-writer and featured vocalist. Her previous collection of original material, 2014’s Daydream, topped iTunes’ Singer/Songwriter chart and landed at No. 6 on Billboard’s New Artist chart. In 2016, she released COVERS, putting her creative stamp on 10 reimagined versions of some of her favorite songs written by other artists. She is managed by the Stable Collective, and her booking agency is WME.

Jillian Edwards’ “But I Know You” Official Lyric Video from Meadow