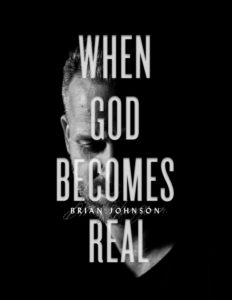 “When God Becomes Real is Brian’s incredible testimony of making what God has done for him bigger than what any person or life experience did to him. This book will challenge you to cultivate a life of worship and immerse yourself in Scripture so that you too can develop a faith that cannot be shaken, no matter what you may face.”

Nashville, Tenn. (Feb. 5, 2019) – Brian Johnson’s new book When God Becomes Real (Bethel Book Publishing), out today, journeys readers through the darkest times of his life as he battled a long jaunt with depression and anxiety head-on. The husband and father of four shares about the vitalness praise and worship served in ushering in the presence of God to fight the panic alongside scripture which was essential in his mind’s renewal. Chris Tomlin, Kari Jobe, Christine Caine and a host of others have supported the authentic tell-all.

“There’s a major need. There’s a lot of people that feel alone, that feel the anxiety and depression,” Johnson shared with Fox News last week. “He’s been real my whole life, but there’s just something that happens when God rescues you and you know that you know that God did it. That’s why I wrote my story so that people can use that as an example in life, encouraging everyone to run after God.”

Johnson is also featured on VICTORY, the awaited new collection of music from Bethel Music. He will take part in 2019’s nationwide “The Victory Tour” presented by Bethel Music with special guests Tasha Cobbs-Leonard and Housefires.

Purchase When God Becomes Real here. The book will be available in Spanish later this month.

Brian & Jenn Johnson are co-founders of Bethel Music, WorshipU and have been integral in the production of more than 15 albums that have influenced the culture of worship across the global church. Brian facilitates an atmosphere of faith in worship and has written anthems such as “Living Hope,””Have it All”, “We Will Not Be Shaken” and “One Thing Remains,” which was awarded No. 1 song for ASCAP Christian Music and No. 1 Radio Single in 2013. Johnson’s newest, chart-topping solo album, After All These Years, released in January 2017 alongside his wife Jenn. They are committed to raising healthy family, cultivating community and fostering unity among worship leaders from around the world. Together they are passionate about raising up worshippers who take hold of their true identity and pursue intimacy with God above all else. Brian and Jenn reside in Redding, California, with their four wonderful children. His first book, When God Becomes Real, is available now.

Get Connected With Brian Johnson: