Film News: Bethel Music Partners with Fathom Events Bringing First Ever Feature Film, Bright Ones, To Cinemas Nationwide for One Day Only 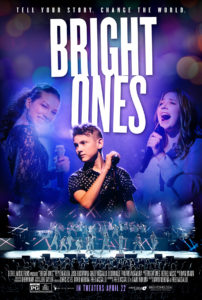 Bethel Music Partners with Fathom Events
Bringing First Ever Feature Film, Bright Ones, To Cinemas Nationwide for One Day Only

Nashville, Tenn. (Feb. 25, 2019) – Bethel Music’s Bright Ones will bring its first ever feature film of the same name to cinemas nationwide this spring for a special one-night event. Presented by Fathom Events, families will be able to enjoy the film in over 700 select movie theaters on Apr. 22. In addition to the screening, Bright Ones will be available in select churches through the Fathom Affinity Network in partnership with Collide Media and Inciite.
Following the lives of three students, each embarking on a journey to find their identity while attending a performing arts high school, the film embraces themes of friendship, family and the courage to find your own voice.

“We truly feel like this film is the fruit of our community’s culture – to see the next generation rising up and leading while being confident in their gifts and identities in Christ is a powerful thing,” said CEO of Bethel Music, Joel Taylor. “As with all things we do, we pray that Bright Ones would not only be a reminder of truth, but also be a resource for other churches to foster their own community of ‘bright ones.'”

The film also includes music from the album of the same name, released this past April to critical acclaim. Breaking the mold of kid’s worship, Dove Award-winning Bright Ones the album offers a diverse pop-influenced soundscape with a mixture of re-invented covers and original songs written by members of Bethel Music, performed by the youth of Bright Ones ages 12 to 16.

Tickets for Bright Ones are available now at www.FathomEvents.com

About Bright Ones:
Bright Ones is ministry formed as an extension of Bethel Music and Bethel Church in Redding, CA for creative talented youth and kids who love God and want to see His Kingdom expand through music, movement and multimedia. Motivated by the brilliance, beauty, and goodness of God, Bright Ones seeks to tell God’s stories through music, films, videos, stage events, teachings and resources that inspire and equip youth and children all over the world. Their first album, Come Alive, released under the name Bethel Music Kids in 2015, and won a Dove Award for Children’s Album of the Year, with their EP Christmas Party (2016) following shortly after. Bright Ones’ latest self-titled project is available now. Bright Ones the movie is set to arrive to cinemas nationwide on Apr. 22, 2019.

About Bethel Music:
Bethel Music is a worship ministry that formed as an organic extension of Bethel Church in Redding, CA. In less than 10 years, Bethel Music has grown from being a local church music ministry to becoming a global outreach featuring a cadre of songwriters and worship leaders, with both online and on-campus worship schools. The Bethel Music Artist Collective includes Brian and Jenn Johnson, Amanda Lindsey Cook, Jonathan David and Melissa Helser, Hunter GK Thompson, Paul and Hannah McClure, Kalley Heiligenthal, Josh Baldwin, Cory Asbury, Kristene DiMarco, Sean Feucht, Emmy Rose, Bethany Wohrle and Brandon Lake. Together these artists have seven acclaimed albums that all went to the top of Billboard’s Top Christian Albums chart, in addition to a GRAMMY® nomination, seven GMA Dove Awards and a GMA Covenant Award. Bethel Music’s multi-artist double-disc live recording Have It All (2016) hit No. 1 on the overall iTunes Albums chart and No. 6 on Billboard’s Top Albums chart, becoming Bethel Music’s highest retail debut on the charts ever proceeded by Starlight, Bethel Music’s first full-length album recorded live on tour, and among their latest to top the chart. Victory, their awaited latest, is available now.

By Kelly Meade|2019-03-05T18:47:52-05:00February 25th, 2019|News|Comments Off on Film News: Bethel Music Partners with Fathom Events Bringing First Ever Feature Film, Bright Ones, To Cinemas Nationwide for One Day Only