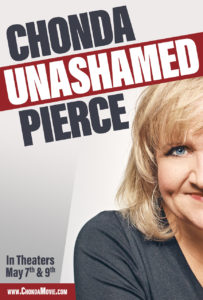 DENVER—Following her emotionally gripping box office hits “Laughing in the Dark” (2015) and “Enough” (2017), beloved best-selling comedian Chonda Pierce is set to return to the big screen in May with “Unashamed.” Presented by Fathom Events and Fuseic Entertainment and premiering in more than 1,000 cinemas nationwide for two nights—Tuesday, May 7 and Thursday, May 9 at 7:00 p.m. local time—”Unashamed” finds Pierce on a quest to explore the hearts and minds of some of the boldest believers in America.

Tickets for “Chonda Pierce: Unashamed” can be purchased at FathomEvents.com and participating theater box offices.

Endeared to fans around the world for her fierce wit and Southern charm, Pierce is also known for her unwavering convictions, a driving force behind “Unashamed.” The film features conversations with such personalities as former Arkansas governor and presidential candidate Mike Huckabee and authors/speakers/real estate entrepreneurs the Benham Brothers, as well as Michael Tait—frontman of GRAMMY®-nominated, Platinum®-selling Newsboys—and Dove Award-winning singer/songwriter Danny Gokey, among others. Both humor and wisdom abound as Pierce and her guests candidly share personal stories of speaking Truth to culture, no matter the circumstance.

“In the pit of my sin, if the God of the universe was never ashamed of me—He who knew no sin—there’s no way I could be ashamed of standing up for the Gospel,” Pierce says of the film’s motivation. “We are in a culture today that is redefining truth and questioning God. Has truth become a moving target that we each define individually? Jesus said He is the truth and He defines truth. Sometimes it feels like we stand alone, but we don’t. The Gospel of Jesus Christ has been setting people free for over 2,000 years.”

“In ‘Unashamed,’ I am honored to talk with many people—some familiar faces and some new friends—to find out how they proclaim the Truth of the Gospel to this hurting world,” she adds. “Together we are standing up for Jesus. Unafraid. Unmoved. Unashamed.”

“Unashamed” follows a string of box office hits for Pierce. Her 2015 award-winning Fathom Events/Fuseic Entertainment release “Laughing in the Dark” documented her life following her husband’s tragic death, seeing sellouts in more than 125 theatres around the country during its one-night cinema debut. Fathom Events/Fuseic Entertainment’s “Enough” followed in 2017, further examining Pierce’s journey to rebuild her life after loss. The latter was also a box-office hit, garnering the highest per screen average of all nationwide theatrical releases on the day of its premiere.

Pierce, who appears often on the iconic Grand Ole Opry, is currently bringing her signature wit to audiences around the country on the “Chonda Pierce: Still Laughing Tour,” featuring special guest Karyn Williams. The tour is slated to hit Indianapolis; Des Moines, Iowa; Fort Lauderdale, Florida; and Shreveport, Louisiana, among numerous other cities this spring.

About Chonda Pierce
A stand-up comedian, television hostess, actress and author, Chonda Pierce has been making people laugh for more than two decades. With six Platinum DVDs, three Gold DVDs and five Daytime Emmy® Award nominations to her credit, she appears often on the internationally renowned Grand Ole Opry and is a regular contributor on TBN’s flagship weekly broadcast, “Huckabee.” Pierce is the Recording Industry Association of America’s (RIAA) best-selling female comedian of all time and has been ranked among Pollstar’s top-selling live performers. 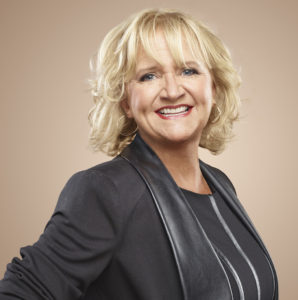