HEAVENQUEST: A Pilgrim’s Progress to Release Everywhere on Digital, DVD, and VOD Platforms Beginning February 4th
This Reimagined Prequel to the Classic Novel “The Pilgrim’s Progress” Named One of the 12 Best Christian Movies of 2019

(Los Angeles, CA—January 20, 2020) — Building off the success of its 48-hour digital sneak preview release in late 2019, HEAVENQUEST: A Pilgrim’s Progress is being released on most digital, DVD, and VOD formats on February 4, 2020. Audiences will also be able to stream the movie, as well as buy digital downloads and DVDs, on the official Heavenquestfilm.com website. 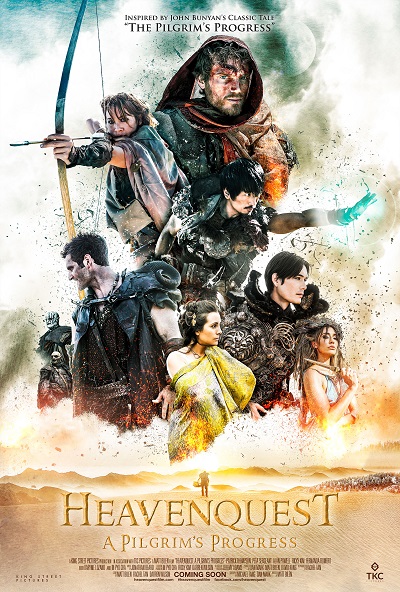 “We are honored and truly humbled to be recognized as one of the 12 Best Christian Movies of 2019 alongside such film legends as Terence Malick, Tom Hanks and the Kendrick Brothers, and we want to thank Crosswalk.com and all of the other media who have supported our underdog film thus far. We tried to do something edgy and groundbreaking in the faith based space with HEAVENQUEST by combining an immersive new fantasy world with Hollywood style action. To see it embraced by audiences both for being something they hadn’t seen before and yet still having a strong God-centered message at its core means the world to us and inspires us to keep creating,” said Dan Mark, Producer of HEAVENQUEST.

HEAVENQUEST caught the eye of movie critics and reviewers for its strong performances, ambitious production design, and modern, inventive take on John Bunyan’s classic novel, including The Christian Post, CBN News, Charisma Magazine, Dove.org, Movieguide, Relevant Magazine, and many others. Crosswalk.com named HEAVENQUEST as one of its 12 Best Christian Movies of 2019, stating that “HEAVENQUEST is a worthy companion story to the classic novel.”

HEAVENQUEST is set in a reimagined fantasy universe inspired by the world and characters in John Bunyan’s timeless masterpiece The Pilgrim’s Progress. Modernized and adapted for today’s audiences, this film acts as an origin story. The film follows Vangel (The Evangelist in the original story), as he explores an expansive new world ravaged by a war between good and evil.

Bunyan wrote The Pilgrim’s Progress in 1678 while he was in prison for holding religious services. Considered the first novel ever written in English, the book has never been out of print, it has been translated into more than 200 languages, and is considered the second most-read book after the Bible.

The Producers and Director Matthew Bilen faced incredible challenges in filming, yet they were able to create an epic fantasy feature with only a micro-budget of $250,000 (1/500th the budget of a major studio film), minimal crew, an international cast, extreme outdoor locations, and no final script.

To learn more about HEAVENQUEST and watch the film, please see Heavenquestfilm.com.

About King Street Pictures: King Street Pictures develops and produces diverse, forward-thinking independent films and television shows for the global marketplace. Founded in 2016 by producers Dan Mark (“Snakehead” and “Fiction and Other Realities”) and Rachel Tan (“Always”), veterans of the entertainment industry with major studio backgrounds and deep ties to Asia, King Street Pictures has a mission to champion new diverse voices in film and television, change perceptions for the next generation, and shape culture from Hollywood to the rest of the world.