Film News: Powerful True Story, “The Least of These” – to release on DVD/VOD May 14th

Home/News/Film News: Powerful True Story, “The Least of These” – to release on DVD/VOD May 14th
Previous Next

Film News: Powerful True Story, “The Least of These” – to release on DVD/VOD May 14th 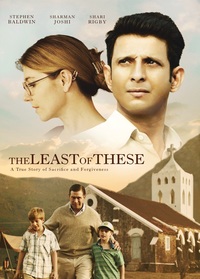 Incredible True Story of Forgiveness
THE LEAST OF THESE
To Release on DVD / VOD Tomorrow, May 14.
Film Shares the Story of Australian Missionary Graham Staines, Who Lived and Died Serving the Leper Community in India.

Dallas, TX – After both a Fathom Event and a nationwide theatrical run in early 2019, biopic THE LEAST OF THESE is set to release on DVD and VOD formats worldwide tomorrow, May 14. Distributed through Universal Home Entertainment, THE LEAST OF THESE stars Stephen Baldwin (THE USUAL SUSPECTS), SHARI RIGBY (OVERCOMER / OCTOBER BABY), and Sharman Joshi (3 IDIOTS).

The film first launched in US theaters on January 31, 2019, just days after the 20th anniversary of the death of Graham and his sons. The film quickly expanded into successful openings in India, South Africa, and Australia.

THE LEAST OF THESE is based on the true story of Australian missionary Graham Staines (Baldwin), who lived with his family in a remote region of India. Graham and his wife Gladys (Rigby) had worked for years assisting with the medical, economic, and daily needs of leprosy patients, but when a motivated journalist (Joshi) begins to investigate claims that Graham was illegally proselytizing the leper community, his words created a ripple effect felt around the world.

Created by Skypass Entertainment, THE LEAST OF THESE was filmed entirely in the Hyderabad region of India.

The DVD includes special bonus features, including –
The Heart of the Story
Ravi Zacharias, Shari Rigby, and Krish Dhanam Discuss THE LEAST OF THESE
The Making of THE LEAST OF THESE
“THE LEAST OF THESE beautifully illustrates the power of love, hope, and forgiveness to overcome hate,” shares Executive Produce Victor Abraham. “It is the very edict of the commandment to love your neighbor as you love yourself.”

For more information on THE LEAST OF THESE, please visit: http://www.theleastofthese.movie.
Pre-order film at Walmart: https://tinyurl.com/WalmartTLOT