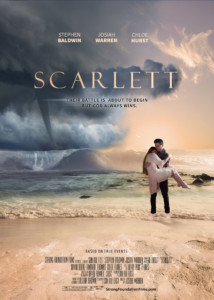 Strong Foundation Films is proud to announce that the new feature film, SCARLETT, will hit select cities nationwide on September 2, 2016. A Red Carpet Premiere will be held on September 1st at the Palladium IMAX in San Antonio, TX.

Thursday, August 18, 2016 — Strong Foundation Films is proud to announce that the new feature film, SCARLETT, will hit select cities nationwide on September 2, 2016. A Red Carpet Premiere will be held on September 1st at the Palladium IMAX (17703 IH-10 West) in San Antonio, TX. The film’s cast will walk the Red Carpet as well as numerous VIP’s including activist, author and Fox News contributor Alveda King, the niece of Dr. Martin Luther King, Jr.

The faith-based romantic drama stars Stephen Baldwin (The Usual Suspects, Bio-Dome, Born on the Fourth of July), Chloe Hurst (The Nice Guys), Amanda Nicole Thomas (One Heart) and Josiah Warren (The Prophet’s Son, In Over My Head) who also directs the film.

SCARLETT is the dramatic love story of two talented architects, Chase (Josiah Warren) and Scarlett (Chloe Hurst). Their dreams for the future abruptly end when Scarlett is diagnosed with cancer. As her life ebbs away, Scarlett struggles with her faith and God’s love for her. How could a loving God cut short her life and plans? Through the prayers and support of Chase’s father (Stephen Baldwin), Chase helps Scarlett overcome her fears and doubts as they fight the battle together.

Meanwhile, living next door to them is a young woman named Mia who is fighting for her life and the life of her unborn child. After leaving a mental institution where she was dropped as a child, Mia fell prey to an abusive marriage. Now she has nowhere to go and no one to help. When Chase hears the sounds of domestic violence coming from next door, he intervenes and Mia discovers that God has heard her prayers. With a surprising ending, the lives of Scarlett, Chase and Mia intertwine and bring hope to the hopeless, peace to the battle, and beauty for ashes.

“This film addresses many important issues including domestic violence, abortion, adoption, and the fight against cancer, demonstrating that God uses every situation to bring glory to Himself and that deliverance and salvation come through Him,” says Executive Producer and Strong Foundation Films founder Sun East. “SCARLETT has a strong message of salvation and demonstrates how we must fight the good fight and serve God all the way to the end.”

Adds co-star Stephen Baldwin, “It doesn’t matter who you are or where you’re from, it’s going to speak to you. It’s going to touch you.”