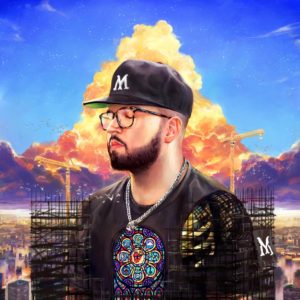 (Atlanta – August 13, 2019) — Rapper Andy Mineo is set to crack open the vault and release WORK IN PROGRESS: a 12 track mixtape comprised of raw, unmastered and alternate versions of songs recorded over the years. The long-awaited project will be released on Friday, August 23rd and features “Keepin It Movin feat. Guvna B,” “I Don’t Need You,” “1988” and “Anything But Country”. The MC also launched the WORK IN PROGRESS Podcast as a companion piece that breakdowns the creative process, backstory and themes of each song. WORK IN PROGRESS is available now for pre-save and pre-order on all digital service providers.

WORK IN PROGRESS, represents evolution for the New York rapper. By exploring bold themes like fear, group think and family hurt—Mineo masterfully weaves together tight bars and strong hooks over compelling beats. With production by Nottz, !llmind, Ace Harris, Beam, and GAWVI; WORK IN PROGRESS is an introspective offering that invites listeners to shed the self-limiting systems and beliefs that hold us back.

The new mixtape, comes on the heels of an outstanding season for Andy Mineo. In addition to sold-out European dates and a successful run with his label mates on the Unashamed Forever Tour, the rapper landed several syncs including “Coming In Hot” with Lecrae being featured as the title song for NBA player, Steph Curry’s Facebook documentary series, Stephen vs. The Game.

About “Work In Progress: The Podcast”
Work In Progress is a new music podcast brought to you by rapper, Andy Mineo. Inspired by his upcoming mixtape, Andy and his co-host/manager Delgis Mustafa discuss the creative process, inspiration and themes behind his “lost files”. Featuring record label executives, artists, friends and even Andy’s wife, Cristina, as guests; Work In Progress openly explores major themes from his new music including: self-limiting systems, technical ability in rap, creative fear, broken family dynamics, Christianity in today’s political climate and more. New audio & video episodes will be released every three weeks on Fridays. andymineo.work