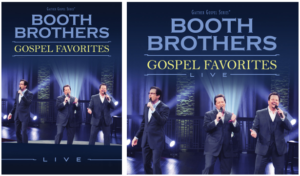 A collection of some of the trio’s most requested songs, the project, produced by Kim Ryan White, features such crowd-pleasers as “I’m Feeling Fine,” “Jesus Saves,” “Welcome to the Family,” “In the Sweet By and By,” “Down by the River,” “Because He Lives,” “He Saw It All (The Blind Man Song)” and more.

“These are the songs, with the exception of some new selections, that have become part of people’s lives and found a way into their hearts. We have seen God use these songs to love on His people and give them hope,” stated group member Michael Booth.

The trio, a southern gospel mainstay and a popular group on the Gaither Homecoming Video Series, received the 2016 GMA DOVE Award for Southern Gospel Album of the Year for their previous recording Still (Gaither Music Group), produced by Jason Webb, Lari Goss, Ronnie Booth, Michael Booth and Jim Brady. The Best of the Booth Brothers DVD, hosted by Bill Gaither, is certified gold by the RIAA.

The Booth Brothers are currently nominated for six Singing News Fan Awards – including Album of the Year. Known for their intricate blends and arrangements, the group has won over 45 Singing News Fan Awards and received three previous GMA DOVE nominations. Their recent single “Dirt on My Hands” was a Top 10 radio hit on the national charts.

For a preview of Gospel Favorites LIVE, visit: https://www.youtube.com/watch?v=wqdKWaqqdic

The Gospel Favorites LIVE recordings are exclusively distributed by Capitol Christian Distribution and Universal Music. They are now available through general market stores and the Christian marketplace in addition to online retailers including iTunes, Amazon and gaither.com.