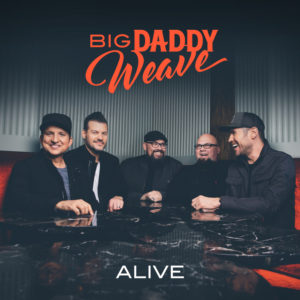 “Alive” was co-written by the band’s friend, recording artist Zach Williams. Williams’ life direction was dramatically changed a few years ago when he heard Big Daddy Weave’s song “Redeemed” on the radio. When Williams was a guest artist on a Big Daddy Weave tour last year, he shared his song “Alive” with the band during a bus ride to the next show. The band committed to recording the song on the spot.

Mike Weaver, lead vocalist for Big Daddy Weave, shares, “As the Lord used ‘Redeemed’ to touch Zach’s life, He is now using a song that Zach wrote that so deeply speaks to where we are. This song came in its perfect timing, with us coming out of a hard life season and into a season of light. We cannot wait for everyone to hear a song that means so much to us as a band.”

Following the near death of Jay Weaver, the passing of Mike and Jay Weaver’s father on Christmas Day 2017, and the cancer diagnosis of their mother, the release of “Alive” represents a definitive statement of life for one of Christian music’s biggest headlining touring artists. The band is able to share the new song along with many of their hits and fan favorites on “The Alive Tour,” which just kicked off last night in Ohio. The 35-city tour is set to run through April. Click here to visit the band’s tour page for the most updated tour schedule.

ABOUT BIG DADDY WEAVE: Big Daddy Weave is one of Christian music’s most beloved artists. A mainstay at radio, the band has achieved consecutive No. 1 singles, including “Love Come To Life,” “Redeemed,” “The Only Name (Yours Will Be),” “Overwhelmed” and “My Story.” RIAA Platinum-certified “Redeemed” became an anthem of unprecedented impact when it spent 11 weeks at No. 1, was dubbed “Song of the Year” at the first annual K-LOVE Fan Awards, and earned Dove Award and Billboard Music Award nominations. Their follow-up hit, “The Lion and The Lamb,” has become one of the genre’s most streamed songs.
Now in their 21st year as a band, Big Daddy Weave members Mike Weaver (lead vocals, guitar), Jay Weaver (bass, vocals), Jeremy Redmon (guitar, vocals), Joe Shirk (saxophone, keys, vocals) and Brian Beihl (drums) have released eight full-length projects, amassed more than one million units in album sales and have received numerous honors, including a Dove Award, ASCAP and BMI Awards, and the prestigious Rich Mullins Artist Impact Award, among others. Their ninth album will release fall, 2019.

Visit bigdaddyweave.com and on their social links below for more information.