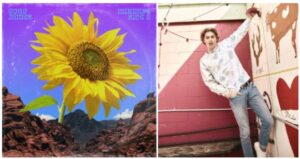 Chart-topping singer, songwriter and guitarist Coby James releases Mixtape Vol. 1: Side A today (April 2) from Centricity Music. Available now at digital retail and streaming outlets everywhere, the new EP is the first of a trio of mixtapes coming this year from this accomplished 19-year-old artist.

Although technically still a new artist, James has already notched a No. 1 song on Billboard’s Christian Hot AC/CHR chart as a contributing writer on Courtnie Ramirez’s track, “Who We Are.” He’s also scored a Top 5 hit on the same chart with “Born Ready,” a song on which he serves as the lead artist, co-writer and co-producer.

Taking over leading teen publication TigerBeat’s Instagram today, the Nashville transplant and North Carolina native’s rare talent is set to be further showcased throughout 2021 across three recordings, each possessing its own distinct sound. With this first EP, Mixtape Vol. 1: Side A, James unveils a four-song set of pop jams.

James’ appreciation for pop music runs deep with a sound that melds a clear mix of beats directly influenced by current chart-toppers with his own experimental edge. Mixtape Vol. 1: Side A features “New Roots,” reminiscent of Coldplay, “Castles,” riding the resurgent ’80s wave made popular by artists like The Weeknd and Dua Lipa, and “Simple,” blending elements of Alec Benjamin and Justin Bieber while traveling into thoughtful, descriptive lyrical territory as James explores the cost of fame vividly set in the Hollywood hills.

“When you’re chasing fame and chasing money, you lose yourself,” he asserts. “It’s a very real thing that a lot of artists and people in this industry deal with—slowly forgetting why they’re really here.”

Then there’s “Golden,” James’ first self-described “happy song” that incorporates the uplifting vibes of the Jonas Brothers and Julia Michaels. He wrote the positive track with his longtime collaborator David Spencer shortly after he moved to Nashville and spent the next month sleeping in Spencer’s vocal booth and eating dinner every night with the producer’s family.

“The song is about the transformational love of God. It feels really good to be loved by Him, and we should celebrate that,” James enthuses of the track penned during 2020’s quarantine. “His love’s golden, it’s one of a kind.”

While his production prowess behind the board shines on these Mixtape Vol. 1: Side A songs, the astute listener will wisely take a deep dive into his lyrics. “I’m a storyteller,” says James. “I want to tell my story; I want to tell other people’s stories, and it’s always going to come from a Christian perspective.”

It’s a perspective he gleaned growing up in church in his small hometown outside of Raleigh, where he eventually began leading worship. It’s also a point of view he derived from listening to Christian music as a kid who was diagnosed with ADHD at a young age. As a child, he additionally battled Lyme disease, as well as half a dozen other illnesses that accompanied Lyme. Treatment included large doses of antibiotics and up to ten hours a day receiving IVs.

“I feel like I’ve definitely been through the wringer in a way,” says James, “but God used those things that I went through to give me something to talk about and a layer of depth that I can dig into when I’m writing.

“I think it’s helped me in ways I could never imagine,” he continues. “I thank God for the fact that I went through those things. In the moment, I didn’t quite know why, but I now think it’s because it gave me something to say.”

The additional EPs set to release this year will shine a spotlight on James’ acoustic sensibilities, rooted in his masterful guitar skills; as well as his more artsy, experimental side—the side that isn’t afraid to tinker in the studio.

Taking his new music and hit songs on the road, James will be joining Danny Gokey for the “New Day Tour” beginning April 8 in Indianapolis, IN.

About Coby James:
Writing, producing and performing all of his own music, James assembles relatable moments, packaged in vibrant sonics, carefully curated from a wide range of artistic influences. As an artist, he is drawn to unorthodox modern pop beats. As a believer, he’s led by his Christian values. As a guitarist, he’s driven by a singular instrument, intent on honing his craft until he’s every bit the expert. As a 19-year-old on the cusp of full-fledged adulthood, he’s a thoughtful extrovert, who admittedly eats, sleeps and breathes music. He occasionally surfs, too, but even on days when he’s lucky enough to catch a wave, he’s writing. And his music is proof that his work ethic is unmatched. He writes every single day—that’s what makes him happy. It’s a habit he’s been cultivating since songwriting lit a fire under him at 15.