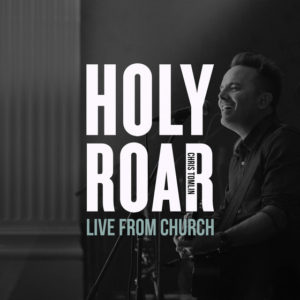 Nashville, TN (March 15, 2019) – Grammy® winning and Platinum selling artist-songwriter Chris Tomlin launched his “Holy Roar Tour” with sold-out shows last week and today he is offering more live music with the release of a new live album HOLY ROAR: LIVE FROM CHURCH. The album, recorded at a church in Nashville in front of 200 worship leaders, contains seven songs from Chris’ HOLY ROAR album released last fall, including the new radio single and rising worship song “Is He Worthy?,” plus a song by Pat Barrett, who is signed to Chris’ imprint label Bowyer & Bow. HOLY ROAR: LIVE FROM CHURCH is available HERE and for the official album video playlist click HERE. Chris discussed the album and his touring year with the Tennessean and USA Today. Read it HERE

“I’m so excited to be releasing this live music today and to be performing these songs on tour this spring,” said Chris. “I want to write songs that give people a voice to sing and fill the churches. It’s not just a studio recording, but you hear all the people and the life that’s in that. I think this is so important to have this because you hear the songs in the truest form in which they were written,” he shared with the papers.

Chris’ 2019 touring year will also include the third-annual “Good Friday Nashville” concert at Bridgestone Arena on April 19, his first concert at the iconic Hollywood Bowl on his birthday May 4, and his first-ever trip and concerts in Israel, Chris Tomlin Worship Nights in Israel- A Journey Through the Holy Land, a 7-day destination/ concert event June 20-27 that will tour Galilee, the Dead Sea, Nazareth, Capernaum, Mount of Beatitudes, the Garden Tomb, and more.

“I keep hearing from everyone who goes (to Israel) that it is one of the most life-impacting trips you’ll ever take,” Chris said to the Tennessean/USA Today. “To experience that for the first time and to be able to have concerts at the Sea of Galilee and have concerts in Jerusalem and gather people around the Garden Tomb, this is going to be unlike anything I’ve ever gotten to do. We’re going to be standing in places where he said things that changed the world. To sing about the cross and be right there in that place, I can just imagine that’s going to be a different level of emotion and a different level of power.”

Later this summer Chris will return for two shows to Red Rocks Amphitheatre, where in 2017 he became the first Christian artist to play back-to-back concerts at the historic venue. Chris will end this year with fall and Christmas tours.

HOLY ROAR: LIVE FROM CHURCH track listing:
1. Is He Worthy?
2. Holy Roar
3. Goodness, Love And Mercy
4. Build My Life (feat. Pat Barrett)
5. Praise Him Forever
6. Impact
7. Nobody Loves Me Like You (feat. Ed Cash)
8. Praise Is The Highway

Chris Tomlin is one of the most heralded singer-songwriters in the world who has amassed an impressive body of work. With 12 albums, 16 #1 radio singles, a Grammy and an American Music Award, 3 Billboard Music Awards, 21 Dove Awards, a BMI Songwriter of the Year Award with two platinum and five gold albums to his credit and over 8 million albums sold, Chris is among the most recognized and influential artists in any genre of music known around the world. It is estimated each week 20-30 million people sing one of his songs in worship and TIME magazine claimed he is the “most often sung artist in the world.” In another career milestone Chris became one of only four artists ever to receive the Sound Exchange Digital Radio Award for over 1 Billion digital radio streams, others include Justin Timberlake, Pitbull and Garth Brooks. Chris’ concert tours have sold-out venues in major cities including New York City’s Madison Square Garden, The Forum in Los Angeles, Nashville’s Bridgestone Arena and Red Rocks in Denver, among others.

In 2018, Chris held his second annual “Good Friday Nashville” concert at Bridgestone Arena, gathered 175,000 in six-weeks during his spring concert tour, launched an imprint record label Bowyer & Bow, headlined a sold-out Canadian tour in September, was recognized as the first Christian artist to reach the Billion streams threshold on PANDORA and was presented with their BILLIONAIRE award, wrapped a 12-city Christmas Tour in New York City in December after a run of sold-out shows and performed on Good Morning America.