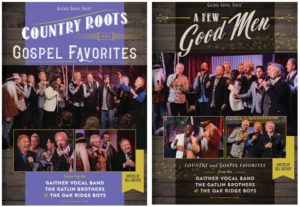 Country and Gospel Music Icons the Gaither Vocal Band, The Gatlin Brothers and The Oak Ridge Boys Join Together for All-new CD and DVD Recordings
Country Roots and Gospel Favorites and A Few Good Men TV Specials to Premiere This Month

NASHVILLE, Tenn.—January 9th–Country and gospel music icons the Gaither Vocal Band, The Gatlin Brothers and The Oak Ridge Boys recently joined together for a special LIVE recording of classic hits and timeless gospel favorites.  The three GRAMMY®, CMA, ACM and GMA DOVE Award-winning artists reflected on their gospel music roots and influences, performed some of their most popular songs and combined harmonies for numerous once-in-a-lifetime collaborations.

The event resulted in two CD and DVD collections entitled Country Roots and Gospel Favorites and A Few Good Men, hosted by ASCAP Songwriter of the Century Bill Gaither.  The sing-along was recorded at Gaither Music Group’s Studio C, known as the setting for many Gaither HOMECOMING video tapings over the past three decades.

In addition to popular songs from three of the most recognized groups in country and gospel music, the DVDs feature a visit inside the Gaither Hall of Honor with Gaither, Larry Gatlin and Oak Ridge Boy Joe Bonsall.  These music legends–members of the Country Music Hall of Fame, Gospel Music Hall of Fame and The Grand Ole Opry–reminisced about their longtime friendships, shared memories from all-night singings at the legendary Stamps Music School and discussed the importance of gospel music in their lives throughout their careers.

“It was a dream come true!” stated Bill Gaither.  “The three groups – The Oak Ridge Boys, The Gatlins and the Gaither Vocal Band–what a reunion and what a happening…”

“Bill and I have been talking about doing a special with these three groups for a long time,” stated Oak Ridge Boy Duane Allen.  “It all finally came together—three groups with roots in gospel music, singing separately and together, on some of the great gospel songs and on each other’s hit songs.  It was a full day of singing and sharing how God has blessed all of us in special ways.”

Full of emotion and camaraderie, these recordings highlight The Oaks Ridge Boys’ unmistakable four-part harmony, the compelling arrangements of the Gaither Vocal Band and the soothing family blends of The Gatlin Brothers.  Fans will enjoy inspiring stories, anecdotes and hits such as “He Touched Me,” “Thank God for Kids,” “All the Gold in California,” “Loving God, Loving Each Other,” “Elvira,” “I’d Rather Have Jesus,” “Houston (Means I’m One Day Closer to You),” “Chain Breaker” and more.  The three groups are each touring nationally in 2018.

To enjoy a promotional video from the taping sessions, visit:

Country Roots and Gospel Favorites and A Few Good Men will premiere as a TV special on RFD-TV on January 18th, January 20th, January 25th and January 27th.  The special will also air on a large number of networks including PBS, DirecTV, Dish TV, AT&T U-verse, TBN, GaitherTV, FamilyNet, CTN, GMC, GMTN, Guardian, Liberty, TCT and TLN. In Canada it will air on Vision TV, The Miracle Channel, CTS and Hope TV.

The DVD and CD recordings are exclusively distributed by Capitol Christian Distribution and Universal Music and will be available on January 26th, throughout general market stores and the Christian marketplace in addition to online retailers including iTunes, Amazon and Gaither.com.  It is currently available for pre-sale at Amazon.com, Christianbook.com, LifeWay.com and Gaither.com.

For further information about these new releases and the Gaither Homecoming family of artists visit:

ABOUT GAITHER MUSIC GROUP
One of the largest independent Christian music companies in the world and a household name for millions of fans, GAITHER MUSIC GROUP is known worldwide for its award-winning and top-selling CD and DVD recordings, including the Gaither Gospel Series, of which 133 products have been certified gold, platinum or multi-platinum.  These recordings, which encompass more than 177 video copyrights, showcase gospel music pioneers, many of the finest performers in the gospel genre, up-and-coming acts and country artists including The Oak Ridge Boys, Jimmy Fortune, Joey+Rory, Alabama, Alan Jackson, George Jones, Vince Gill and others.  The Gaither brand of artists and products topped the BILLBOARD Year-End Chart of Music Video Sales Labels for 2000, 2011, 2014, 2015 and 2016 and has garnered sales of over 40 million units.  Founder and recording artist Bill Gaither is a six-time GRAMMY® Award winner and a recipient of over 41 Gospel Music Association DOVE Awards.

A Few Good Men, Country and Gospel Favorites from the Gaither Vocal Band, The Gatlin Brothers and The Oak Ridge Boys
TRACK LISTING