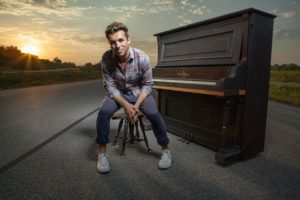 NASHVILLE, Tenn.—Singer/songwriter and pop vocalist Curt Anderson is poised to impact growing international audiences with tour dates around the globe this spring, in conjunction with the March 30 release of the Every Moment Deluxe Version. The project features four new songs, along with his current two singles: a remix of “Love Like You Love,” co-written by Anderson and award-winning writer/producer Pete Kipley (Mercy Me, Matthew West), and both a Hot AC and piano-based version of “Keep Me Falling,” written by Anderson, Daniel Doss and David Thulin. The latter song’s Hot AC recording is in the Top 10 on Christian radio charts in Australia after just five weeks.

“’Love Like You Love’ is about showing people around me the love of Christ in whatever ways I can, big and small,” Anderson said. “One of the easiest ways we can show others love is by giving them attention. Not living with blinders on. Not living with a screen constantly in front of our face. And not being apathetic to the world around us. It’s about striving to live brilliantly.”

With an international emphasis uncommon in Christian music, Anderson has traveled frequently to Australia, Hong Kong, England, Wales, Canada, Germany and Qatar. Following recent performances in Australia, he will be traveling to the Philippines and making a return trip to the “Land Down Under” in coming months.

“Growing up in a family of travelers, international touring has been a part of the fabric of my life for as long as I can remember,” Anderson explains. “Since my first trip to Australia in 2008, God has used relationships there to grow and sustain me as a musician. I made it my goal to visit as many radio stations that were playing my music around the world as I could—I wanted to build relationships and show the staffs and listeners I valued and appreciated them. Those relationships have grown to represent nearly 40 countries.”

“Music is not limited by borders,” he continues, “and in the calling God has put on my life to model and share His love, how can I put geographic limits on that? To have audiences singing, jumping and clapping along during concerts and worship gatherings in countries from Japan to Kenya … to watch these songs impact and connect with people is an amazing experience I get to praise God for every time.”

An international ambassador of Christian music, Curt Anderson has released two full-length albums and two EPs since his recording debut in 2005. His most recent release, Every Moment (2016), featured the hit singles “Keep It Beating” and “Every Moment,” both reaching the Top 5 on Christian radio charts in multiple countries. He has also collaborated on recordings by such artists as kj-52, Tricia Brock (formerly of Superchick), and Satellites & Sirens. A graduate of Anderson University’s acclaimed music business program, Anderson and his family reside outside Nashville.