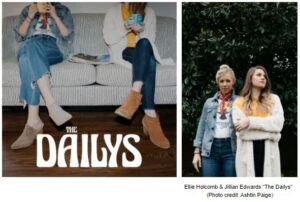 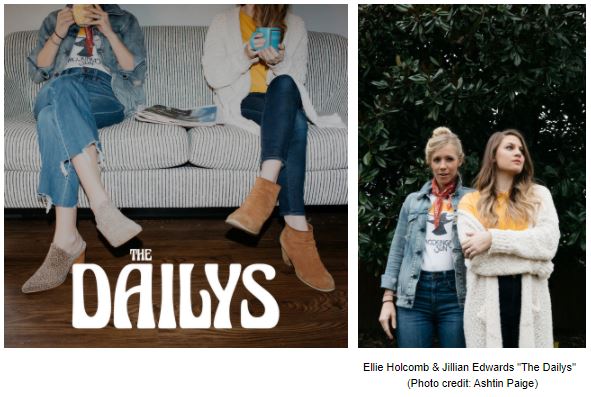 Both Holcomb and Edwards have become staple songwriters in the Nashville songwriter community over the years. They have co-wrote 10 songs together including songs that have also appeared on their individual solo projects.

“The music making community in Nashville is a rich one, and sometimes…just sometimes …you get to collaborate with some of your favorite artists and people to make a project together – in this case Jillian and Ben,” shares Ellie Holcomb. “We hope this project is full of the kind of beauty that nourishes the soul.”

“I love making music with Ellie and love our producer Ben Shive,” states Jillian Edwards. “I hope these songs serve you and your daily life.”

About Ellie Holcomb: Ellie Holcomb, a Nashville native, began her musical career by touring the country with her husband in Drew Holcomb and The Neighbors. After 8 years, and with the birth of their daughter, Ellie opted to step out of the role of heavy touring. From that space came her debut solo album, As Sure As The Sun, which charted at No. 1 on the iTunes Christian chart and helped deem Holcomb the “Best New Artist” at the 2014 Dove Awards. In 2017, she released Red Sea Road (Full Heart Music), which debuted at No. 3 on the Billboard Christian Album sales chart and on the Top Current Album Sales, overall chart. In 2018, she became a best-selling author with the release of Who Sang the First Song? (B&H Publishing Group) and Dove-nominated EP, Sing: Creation Songs. She followed-up those projects with Don’t Forget To Remember (B&H Kids), and accompanying EP, Sing: Remembering Songs, which won the 2020 GMA Dove Award for “Children’s Album of the Year.” Ellie and her her husband, Drew, have entertained their fans through the pandemic first bringing song covers from their kitchen night after night with their “Kitchen Covers,” and as well as being the face of a special Tennessee Tourism campaign featuring their family with four episodes. She is currently finishing up a new album that will release in 2021. Ellie, her husband and their three children live and make music in Nashville.

About Jillian Edwards: For more than a decade, Jillian Edwards—who now resides in Nashville with her husband, Will, drummer for indie rock band Colony House, and their daughter, Willow Faye—has consistently written and recorded music through the lens of faith, even when she’s crafting songs about love and relationships or writing songs specifically for film and television. The latter has seen Edwards’ songs featured in television episodes of Nashville, Pretty Little Liars and Grey’s Anatomy, and on commercials for Citibank among other high-profile brands. In addition, a collaboration with EDM DJ Thomas Gold resulted in a surprise hit for the singer/songwriter with “Magic,” on which she is credited as a co-writer and featured vocalist. Her previous collection of original material, 2014’s Daydream, topped iTunes’ Singer/Songwriter chart and landed at No. 6 on Billboard’s New Artist chart. In 2016, she released COVERS, putting her creative stamp on 10 reimagined versions of some of her favorite songs written by other artists. In 2020, she released her new album Meadow, where this singer/songwriter once again wears her heart on her sleeve creating a project that is ready-made for rest, solitude and comfort.