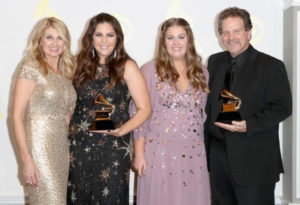 Nashville, Tenn. (Feb. 14, 2017) — Hillary Scott & The Scott Family’s No. 1 single “Thy Will” and hit album LOVE REMAINS won two GRAMMY® Awards at the 59th Annual Awards show on Sunday, Feb. 12. “Thy Will” won the category of Best Contemporary Christian Music Performance/Song, and LOVE REMAINS took the category of Best Contemporary Christian Music Album. A steadfast hit among audiences, “Thy Will” remains in the Top 10 at the Christian AC Monitored chart this week after hitting No. 1 on the National Christian Audience chart, Billboard’s Christian Digital Songs chart and Billboard’s Hot Christian Songs chart earlier.

“Thank you to all of the people who used their heart and their hard earned talent to really catch the vision of what we wanted to say and what we hoped to do, and this far exceeds it,” shared Hillary Scott after winning two GRAMMY® Awards with her family. “We give all the glory to God.” 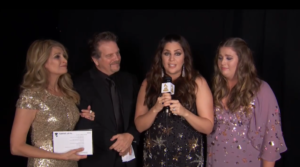 LOVE REMAINS follows more than 18 million album sales worldwide for Hillary Scott as one-third of the one of the world’s most popular groups, Lady Antebellum. The trio has earned six PLATINUM singles and dubbed ACM and CMA “Vocal Group of the Year” three years in a row. For more information on new music and more, visit www.hillaryscott.com.