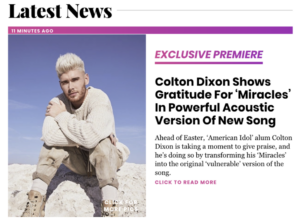 Nashville, TN…. April 10, 2020 – Colton Dixon’s hit track “Miracles” is making its way up the radio charts with more adds each week, and today, Hollywood Life is exclusively premiering a special piano video of the song.

“This is how we initially wrote the song,”  Dixon said to Hollywood Life. “Stripping a song back to its original form feels vulnerable, but I’m excited for listeners to get a glimpse into what it was like at the studio that day.”  Talking about life amidst the COVID-19 pandemic and how they’re spending their time at home, Dixon also commented that he and wife Annie have been making the most of our time at home, “Trying new things in the kitchen, legos, puzzles, home projects, and preparing the nursery for our twins has kept the time flying by.”

The American Idol finalist and fan favorite will release his self-titled EP with Atlantic Records/Hear It Loud later this spring/summer.