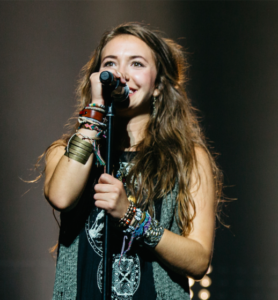 NASHVILLE, TN. (January 26, 2018) Centricity Music artist Lauren Daigle’s “O’Lord” is Christian music’s Number 1 song in the country, making it the third No. 1 single from her RIAA-certified Gold, debut album, How Can It Be. The song not only hit No. 1 on the Mediabase Christian Audience Chart, but also the Mediabase AC Published and Nielsen AC Monitored charts.

“Wow! Five singles in. Who would have known? I’m so grateful that people are still connecting with these songs,” Daigle reflected. “’O’Lord’ is a song’ that is for the darkest times. If it has brought any hope, then it has served its purpose. Thank you to my team, the radio programmers, and the listeners for making space in their hearts and giving ‘O’Lord’ a chance.”

This milestone follows recent accolades for Daigle. At the end of last year she won the 2017 American Music Award for Favorite Contemporary/Inspirational Artist and her Christmas album Behold stood four weeks at No. 1 on Billboard’s Christian Albums chart, one year after its release.

“O’Lord” marks another great chapter for the singer-songwriter, who has garnered Grammy nominations, Billboard Awards, Dove Awards, Forbes “30 Under 30” honors, among other forms of acclaim. How Can It Be currently stands at No. 2 on the Billboard chart, three years after its debut.

About Lauren Daigle: Signed to Centricity Music in 2013, Lauren Daigle’s first full-length album How Can It Be, now RIAA Certified Gold, released in April 2015. The album was also nominated at the 2016 GRAMMY® Awards for Best Contemporary Christian Music Album, while one of its top singles, “Trust In You,” was nominated for the 2017 GRAMMY® Award for Best Contemporary Christian Music Performance/Song. How Can It Be won the Billboard Music Award for Top Christian Album in both 2016 and 2017; in addition, Daigle took home the Billboard Award for Top Christian Artist last year. She won the 2017 American Music Award for Favorite Artist (Contemporary/Inspirational) and has won seven Dove Awards (nominated for 14), including New Artist of the Year and Song of the Year in 2015 and Artist of the Year and Songwriter of the Year in 2016. Daigle has also received four K-LOVE Fan Awards, including Artist of the Year in 2016. How Can It Be spent 11 weeks at No. 1 on Billboard’s Top Christian Albums chart. The album also premiered in the Top 30 on the Billboard 200 and reached No. 1 on iTunes’ Christian Gospel Top Albums Chart. To date, the album has achieved over 1 million in total consumption, including 828,000 album sales, 1.4 million in track sales, and more than 357 million streams, positioning Daigle as the fastest-selling new artist in Contemporary Christian music in the past decade. In her career to date, Lauren Daigle has had more than 247 million YouTube and Vevo views, with approximately 640,000 subscribers. Her video for “Trust in You” has had more than 53 million views.

About Centricity Music: Centricity is an independent Christian music company based in Franklin, Tenn. Founded in 2005 with a commitment to artist development and stylistic diversity, its artist roster includes Aaron Shust, Andrew Peterson, Caitie Hurst, Carrollton, For All Seasons, Jason Gray, JJ Weeks Band, Jonny Diaz, Jordan Feliz, Lauren Daigle, Neon Feather, North Point InsideOut, Peabod, and Unspoken. Providing label and publishing services, Centricity is a family-owned organization, and they like it that way. The committed work of its staff and artists has yielded successes such as Grammy nominations, Billboard Awards, Dove Awards, K-Love Fan Awards, a Gold Album, and Gold Singles. For more information on Centricity Music: www.centricitymusic.com.