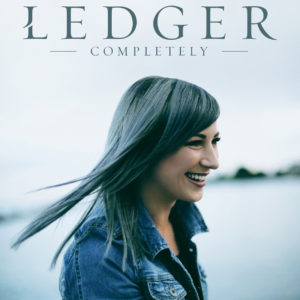 Nashville, Tenn. (Feb. 15, 2019) – LEDGER has released a brand-new single, “Completely,” available now with Fair Trade Services. Last year saw drummer and vocalist Jen Ledger of multi-platinum selling, GRAMMY® nominated rock band Skillet stepping out from the behind the drums as her own frontwoman to release her critically acclaimed self-titled EP. LEDGER (Atlantic, Hear it Loud) made the highest debut on Billboard’s Top Christian Albums Chart, hitting Top 5 on Rock charts as well as No. 2 on iTunes Rock Albums chart and No. 7 on iTunes Overall Albums chart.

“Providing something fresh,” (Loudwire) “infectious” (Worship Musician) and a “finely crafted masterpiece” (Jesus Wired), “Completely” is the UK native’s follow-up to LEDGER’s “impressive debut” (Heavy Music HQ), a celebration of God’s love despite our brokenness. Available digitally today, the song is going for adds at Christian AC and Hot AC/CHR radio on March 29.

“I find it so mind-blowing that before the creation of the world, God knew me and he loved me,” said LEDGER. “It’s simple, but it’s profound and it’s something worth celebrating.”

LEDGER continues her nationwide trek as a part of the blockbuster lineup featured on this year’s “The Winter Jam Tour Spectacular,” sharing the stage with other top names including Danny Gokey, Hollyn, Mandisa, Newsboys, NewSong and Rend Collective. For a complete list of cities and dates, visit http://2019.jamtour.com/

With an engaged and ever-growing social media presence, the latest signee for released her debut solo endeavor LEDGER released her self-titled debut last year with Atlantic Records and Hear It Loud to critical acclaim. Her latest single, “Completely,” is available now.