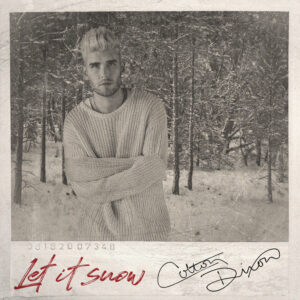 Dixon’s first holiday release since “Jingle Bells” in 2012, his new rendition of “Let It Snow” comes as Dixon and wife Annie will celebrate their first Christmas with their newborn twins, Dior and Ava. Written by lyricist Sammy Cahn and composer Jule Styne in July 1945, the classic was penned in Hollywood, California, ironically during a heat wave as Cahn and Styne imagined cooler conditions.

“‘Let It Snow’ has always been a favorite of mine,” Dixon remarked about the tune. “Annie and I are so excited to celebrate our first Christmas as a family of four, so recording a new song in time for the holidays just seemed like a really fun idea. Not sure we’ll get any snow either, but one could hope!”

Dixon’s latest hit single, “Miracles” appears on his Atlantic Record’s debut, the self-titled EP that released to critical acclaim in May 2020. “Miracles” has not only been a hit single for the singer-songwriter, hitting No. 1 for six weeks on Hot AC/CHR and currently No. 9 on Billboard’s National Christian Audience chart.

ABOUT COLTON DIXON:
Colton Dixon quickly became a household name in 2012 when he was voted a fan favorite and made it to the top seven on Season 11 of Fox’s hit show AMERICAN IDOL. His career has been on the fast track ever since, now boasting over 100 million streams across all platforms. Dixon’s 2013 debut, A Messenger, set the record for biggest first-week sales by a new solo Christian act, becoming the No. 1 selling album by a new Christian artist. Dixon is also a Steinway & Sons artist, following in the footsteps of legendary artists such as Harry Connick, Jr. and Billy Joel. Dixon’s sophomore effort Anchor included the most played Hot AC single of 2014, “More Of You,” which spent three weeks at No. 1, as well as “Through All of It,” his fourth consecutive No. 1 at Hot AC Radio. In 2013, Dixon won a Dove Award for Best Rock/Contemporary Album Of The Year, along with two additional nominations. In 2015, Anchor was honored with the Dove Award for Rock/Contemporary Album of the Year. Dixon received back-to-back K-LOVE Fan Award nominations for Male Artist of the Year in 2014 and 2015, followed by the release of his third studio album Identity, which included the top 5 single “All That Matters,” whose video was premiered by PEOPLE magazine. His latest, critically-acclaimed, self-titled EP, boasting this hit single “Miracles,” is available now.