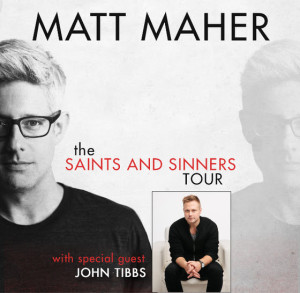 MATT MAHER ANNOUNCES SPRING DATES FOR HIS “SAINTS AND SINNERS” TOUR WITH SPECIAL GUEST JOHN TIBBS
NEW RADIO SINGLE “ABIDE WITH ME” IMPACTS RADIO THIS FRIDAY, 3/18
TOUR PARTNERS INCLUDE M– — USEUM OF THE BIBLE AND SAVE THE STORKS

NASHVILLE, TENN. – March 17, 2016 – Eight time GRAMMY®-nominee Matt Maher announces his spring dates of his “Saints And Sinners” tour with special guest John Tibbs beginning April 6th through May 7th. The spring leg of the tour will feature returning ministry partners Save The Storks and newcomers to the tour, Museum of the Bible.

This tour is on the heels of Maher’s three GRAMMY nominations this year including “Best Contemporary Christian Music Album” for his project Saints And Sinners (2015). Inspired by leaders of faith who left profound marks on Christianity, the album highlights songs influenced by historical greats such as Martin Luther King Jr. and Mother Teresa. The album also produced the No. 1 radio single, GRAMMY-nominated and Dove Award winning song, “Because He Lives (Amen).” His new single from this album, “Abide with Me,” will be impacting radio this Friday, March 18. See the lyric video below.

Save the Storks is a nonprofit that joins with local women’s pregnancy resource centers around the country to provide them with a mobile ultrasound unit, or a “stork bus”. Since October 2015, Maher and Save the Storks have teamed up to generate partners through his events. As a result of that initiative, 1000’s of women have been encouraged in their pregnancy towards options that honor the dignity of the mother and the child.

ABOUT MATT MAHER: Since his 2008 major label debut, Matt Maher has become a staple in the artistic and songwriting community. An eight time-GRAMMY® nominee, he has garnered multiple radio successes writing and recording songs like “Lord, I Need You,” “Hold Us Together,” “Christ Is Risen,” “All The People Said Amen” and “Your Grace Is Enough.” Maher has penned songs recorded by Chris Tomlin, Crowder, Third Day, Matt Redman, Hillsong, Passion, Jesus Culture and Bethel among others. Matt has written or co-written five No. 1 radio singles. In 2013, Maher had a career highlight performing in Rio in front of Pope Francis and a crowd of 3 million people, as well as performing in 2015 in downtown Philadelphia as part of the World Meeting of Families with The Fray, Aretha Franklin, Juanes, Jim Gaffigan, among others. In 2015, Maher was awarded his first RIAA Gold certification for his popular single “Lord, I Need You.

ABOUT SAVE THE STORKS: Save the Storks is a pro-life nonprofit that partners with local pregnancy centers around the country to provide them with a “a mobile ultrasound unit, or “stork bus”. The Stork Bus allows pregnancy centers to get outside of their own building and go meet women right where they are – in inner cities, on college campuses, and even directly in front of abortion clinics. This allows women a free ultrasound and the chance to reconnect with the miracle that’s happening inside of them. Four out of five women who step on a Stork bus will choose life for their baby.

ABOUT M– — USEUM OF THE BIBLE: In 2017, the museum will open its 430,000-square-foot nonprofit museum just two blocks from the National Mall.  This museum will showcase an unparalleled collection of antiquities representing 3,000 years of history and provide visitors with an immersive and personalized experience to deepen their understanding of the historical magnitude of the Bible and its impact on the world around us. As of 2015, the museum’s traveling exhibits have visited six U.S. cities and four other countries including Vatican City, Jerusalem, Israel and Havana, Cuba.  New exhibits and locations are continually being planned. The museum also supports research and education through the Museum of the Bible Scholars Initiative, the development of a Bible curriculum for students around the globe, and other programs such as archaeological digs and educational travel opportunities for both students and adults. “Museum of the Bible is thrilled to collaborate with Matt Maher on The Saints & Sinners tour,” shares Ben Greene, Director of Affiliate Partnerships for Museum of the Bible. “We feel that this is an incredible way for us to share our invitation for all people to engage with the Bible. We are honored that Matt would take us on the road with him and encourage his audience to join us in that mission.”

Check out the tour dates below to see if it will be in a city near you.