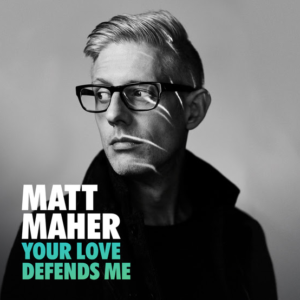 NASHVILLE, TENN. (June 09, 2017) Eight-time GRAMMY® nominated artist Matt Maher is debuting a new song today, “Your Love Defends Me.” It is available now at all digital outlets and streaming providers – click here and below to watch the official lyric video. The single has been released to radio and will be impacting on June 23rd with stations already jumping on board. Corey Mann from 96.9 WHPZ, South Bend said upon hearing the single, “Matt Maher lends a musical maturity to our playlist. I feel like I’m in church when it starts off just with Matt, then more and more people chime-in, and I think our radio audience will do the same thing once they hear the song more and more.”

“This song comes out of Psalm 91, and the idea of God being not a refuge, but our ONLY refuge. I think we can all relate to moments in our lives where who we were (or who we’ll become) comes crashing to the forefront of who we are, and all of a sudden there’s this fight happening inside for who gets control – the past or the future or the present moment now,” shares Maher on the idea behind his new single. “When you combine that with a social media context that is always recording and documenting everything, it lives on in perpetuity either as an accusation or as a testimony. To put it simply – evil is in the business of accusation but God is in the business of raising up testimony – of who He is and what He’s done. This song talks about how God is a defender. How the love of God is not just a defense, but it’s really the only defense we have that can stand against the inconsistency of ourselves. God is your defense and what He says about you is what matters. That’s what stays.”

Kicking off his summer, Maher is currently in the middle of an European tour, which included performing in the UK for the Big Church Day Out festival. This week Maher had the opportunity to visit Rome with the John 17 movement to talk about unity, relational reconciliation and pastoral leadership with the Bishop of Rome and meet Pope Francis. He will also be headlining and/or performing at major festivals throughout the next few months including Big Ticket, Lifest, Porter County Fair, Hudson Fields Christian Music Festival, Soulfest, Abbeyfest and Night Of Joy. Maher will also be in NYC later this month to lead music for the Young Adult Mass for the Archdiocese of New York, presided by Cardinal Dolan. He will conclude his year in Australia and New Zealand in December participating in the 10th anniversary celebration of World Youth Day in Sydney. It was also recently announced that Maher has joined the elite group of musicians and artists as an official Steinway Artist.