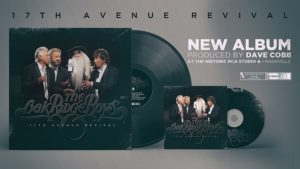 17th Avenue Revival brings The Oak Ridge Boys back to their gospel roots, but with an edge. Under the direction of famed-producer Dave Cobb, the Grand Ole Opry and Country Music Hall of Fame members touched on uncharted territory—and for a long-tenured act like The Oak Ridge Boys, that’s saying something. Somewhat retro, yet new and fresh at the same time, there was no vocal stacking and very few overdubs. For two of the songs, the Boys gathered around one microphone and let the harmonies shine, just as Dave Cobb had planned initially.

Since the start of their highly decorated career, the Oaks have achieved five GRAMMY® Awards, and multiple CMA, ACM and Dove Awards for their crossover brand of pop, country and gospel music that spans multiple generations.

“The Oak Ridge Boys have a deep history of gospel singing, and they have no trouble picking up the habit here.” – Jeff Gage, Rolling Stone

“The set is in fact an “organic” move for the Oaks, whose deep southern gospel music roots–along with early rock ‘n’ roll/R&B energy–have always been the bedrock of their unique country sound.” – Jim Bessman, Centerline

“An album that shows that, well in their fifth decade of recording and touring together, the ‘Mighty Oaks’ still have plenty of fuel in the creative ignition.” – Chuck Dauphin, Sounds Like Nashville

“You now have the perfect reason to put down that god-forsaken phone, buy the album…” – Clay Stevens, American Songwriter 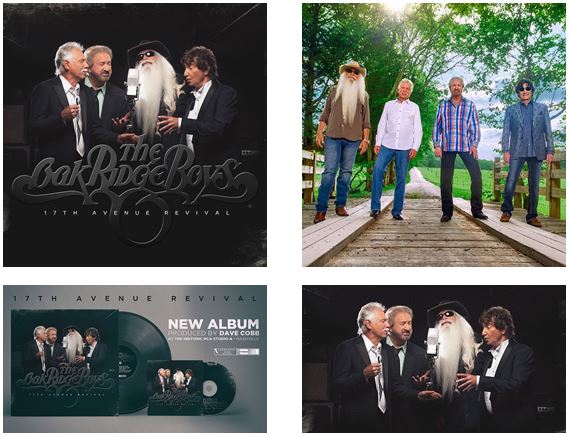 About The Oak Ridge Boys:
The Oak Ridge Boys, who have sold over 41 million units worldwide, are synonymous with “America, apple pie, baseball, pop, rock, gospel and country music.” In addition to their awards and accolades in the country and pop music fields, they have garnered five GRAMMY® Awards and nine GMA DOVE Awards as well as the Mainstream Artist of the Year Award at the ICM Awards. The group—Joe Bonsall, Duane Allen, William Lee Golden, and Richard Sterban—have earned prestigious membership in the Country Music Hall of Fame (2015 Inductees) and Grand Ole Opry, and are known worldwide as one of recording history’s most extraordinary musical successes. They have charted single after single and album after album, celebrating two double-platinum albums and more than 30 Top 10 hits, including No. 1 chart-toppers “Elvira,” “Bobbie Sue,” “Thank God For Kids,” “American Made,” “Y’All Come Back Saloon,” among dozens more. For more information and to view upcoming tour dates for The Oak Ridge Boys, please visit oakridgeboys.com.

About Thirty Tigers:
Thirty Tigers is a music marketing, management, distribution, and publishing company based in Nashville, Tennessee. Thirty Tigers Distribution has served as a label infrastructure for a vast client base including The Avett Brothers, Jason Isbell, Sturgill Simpson, Chase Rice, Lucinda Williams, Ryan Bingham, Patty Griffin, St. Paul and The Broken Bones, Trampled By Turtles, and many others in their 15 years of working with Sony/RED Distribution, now The Orchard.