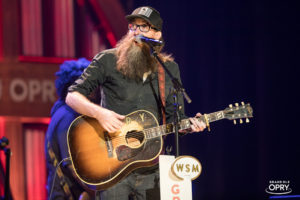 Nashville, Tenn. (Dec. 28, 2016 ) – Rare Country is exclusively premiering Crowder’s performance of  “Run Devil Run” from the Grand Ole Opry. “All We Sinners,” also found on his latest GRAMMY® nominated album American Prodigal, was among the songs included in his set at Nashville’s iconic Ryman Auditorium.

“The Grand Ole Opry is a sacred thing,” shared the 3X GRAMMY® nominee exclusively with Rare Country. “The sounds and words still echo. To join into that great chorus is thrilling and humbling. What I love most about so much of the music that has been part of the history of the Opry is that the struggle between light and dark was so visible. It is the exact thing that inspired the song ‘Run Devil Run.’ The struggle is real. Thank God for the Light.”

In the new year, Crowder will embark as the headliner for the 2017 nationwide Winter Jam Tour. For the most up to date tour stops, click here.

About Crowder:
3X GRAMMY® Nominee Crowder has been embraced for his lyrically powerful and musically elaborate and unpredictable songs that have found themselves being sung everywhere from churches to clubs all across the country. Crowder’s first solo album, Neon Steeple, debuted at No. 8 on the Billboard 200, was named iTunes 2014 Christian Album of the Year, garnered multiple radio hits, two GRAMMY® nominations, a Grand Ole Opry debut, a Dove Award and multiple nods and numerous K-LOVE Fan Award Nominations. American Prodigal, the awaited GRAMMY® nominated follow-up album, became available on Sept. 23 landing at No. 1 on the Christian & Gospel Album Chart, No. 3 on the Digital Albums Chart, No. 5 on the Top Albums Billboard Chart and No. 12 on the Top 200 Billboard Chart. As an active member of the Passion movement founded by Louie Giglio, Crowder participates in the impactful university student gatherings in the U.S. and around the world. A published author, Crowder has also penned two books including his acclaimed release, “Everybody Wants to Go to Heaven, but Nobody Wants to Die.”