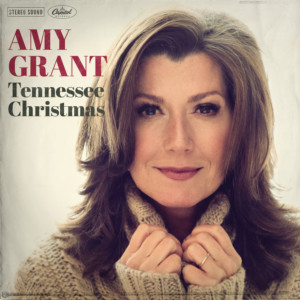 Nashville, Tenn. (September 12, 2016) – Multi-platinum recording artist Amy Grant will unveil her first all-new Christmas album in nearly twenty years on October 21, just in time for the holiday season. A collection of thirteen new recordings, including the title track, Tennessee Christmas offers a blend of heartfelt originals and Grant’s own spin on popular Yuletide classics, seamlessly weaving together the joy, love, laughter, and even grief this season brings. Recorded in her home studio in Nashville, Grant collaborated with producers Mac McAnally (Jimmy Buffett, Martina McBride), Marshall Altman (Marc Broussard, Frankie Ballard) and Ed Cash (Chris Tomlin, David Crowder*Band) to bring this project to life. Looking forward to the release, Grant shares some insight into her vision behind this project – “I’ve loved traveling the world with my guitar, but my favorite musical memories have happened right here at home around Christmastime with family and friends. I hope we’ve captured some of that magic to share with all of you this holiday season!”

With over six million Christmas records sold, all of Grant’s holiday projects have been honored with RIAA platinum or gold certification. This holiday season, she will tour extensively across the country sharing music from Tennessee Christmas as well as her most popular Christmas hits. Grant and Michael W. Smith, joined by Republic recording artist Jordan Smith (winner of NBC’s “The Voice), will present their Christmas favorites with a full symphony orchestra in twenty major markets including Los Angeles, Dallas, Minneapolis, Atlanta and Baltimore. Grant will also be teaming up with husband Vince Gill for “Christmas At The Ryman,” as they continue their wildly successful residency at the iconic Ryman Auditorium in Nashville.

About Amy Grant:
Amy Grant’s career spans more than 30 years and stretches from her roots in gospel into becoming an iconic pop star, songwriter, television personality and philanthropist. With three multi-platinum albums, six platinum albums and four gold albums, her total career album sales have exceeded 30 million. Grant’s chart success has been consistent throughout her career with six No. 1 hits, 10 Top 40 pop singles, 17 Top 40 Adult Contemporary tracks and multiple Contemporary Christian chart-toppers. In addition to her six GRAMMY® Awards, Grant has earned 26 Dove Awards (including four Artist of the Year Awards) and has been awarded a star on the Hollywood Walk of Fame. Conventional wisdom has it that Grant put Contemporary Christian Music on the map becoming the first Contemporary Christian artist to have a platinum record, the first to hit No. 1 on the Pop charts and the first to perform at the GRAMMY® Awards. With that, her legacy as one of the most influential artists of the past four decades is assured. In April, Grant celebrated the 25th anniversary of her iconic hit “Baby Baby” with a worldwide release of the song featuring pop sensation Tori Kelly. Tennessee Christmas will mark Grant’s first all-new holiday album in nearly 20 years.