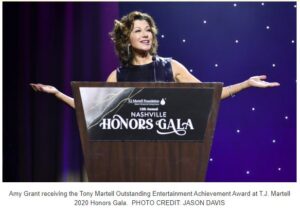 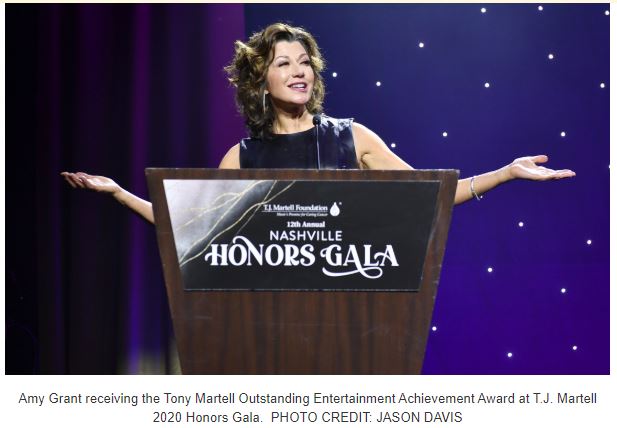 Reba McEntire had the Gala guests laughing – and in tears – over her warmhearted introduction of Grant, followed by a very special magical moment when Vince Gill and Grant’s daughter Corrina joined her father on the keys during his touching performance of “When My Amy Prays.”

Upon accepting her award, Grant gracefully noted that “The world will be changed in unimaginable ways because of our generosity and our effort. All of us in this room tonight have learned the gift that if we give what we have there will always be enough; there will be more than we thought was there; that we can channel every good thing if we will just simply just open up. So thank you so much for this feeling of being buoyed up. I just want to finish strong…. this race.”

About Amy Grant:
Amy Grant’s career spans more than 40 years and stretches from her roots in gospel into becoming an iconic pop star, songwriter, television personality and philanthropist. With three multi-platinum albums, six platinum albums and four gold albums, her total career album sales have exceeded 30 million. Grant’s chart success has been consistent throughout her career with six No. 1 hits, 10 Top 40 pop singles, 17 Top 40 Adult Contemporary tracks and multiple Contemporary Christian chart-toppers. In addition to her six GRAMMY® Awards, Grant has earned 26 Dove Awards (including four Artist of the Year Awards) and has been awarded a star on the Hollywood Walk of Fame as well as the Music City Walk of Fame. Conventional wisdom has it that Grant put Contemporary Christian Music on the map becoming the first Contemporary Christian artist to have a platinum record, the first to hit No. 1 on the Pop charts and the first to perform at the GRAMMY® Awards. With that, her legacy as one of the most influential artists of the past four decades is assured. In April of 2016, Grant celebrated the 25th anniversary of her iconic hit “Baby Baby” with a worldwide release of the song featuring pop sensation Tori Kelly. Tennessee Christmas released in late 2016, marking Grant’s first all-new holiday album in nearly 20 years.