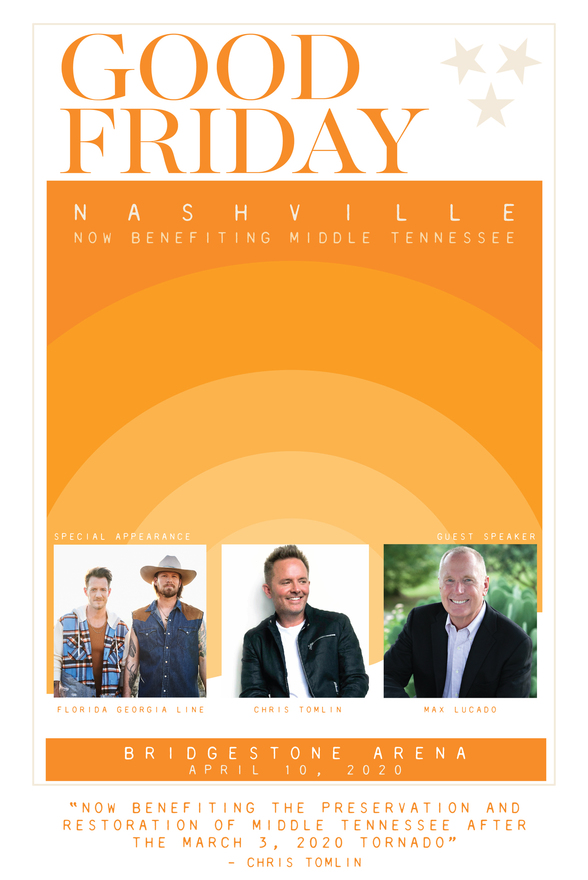 On Friday, Chris announced all proceeds from the ‘Good Friday Nashville’ concert will go to tornado relief in Middle Tennessee and as the concert was previously nearly sold out, the event opened up seats 360-degrees around the arena to increase capacity to maximize the donation to the local area.

“In Nashville and all across the state of Tennessee we have seen such a resilience in the human spirit as strangers have become like neighbors and deeper community has formed out of tragedy,” said Chris “In each of the previous ‘Good Friday’ concerts there has been an unannounced special appearance in the night and this year’s is just too good to keep a secret! I am so grateful and honored to announce my good friends Tyler and Brian of Florida Georgia Line. Beyond their unmatched talent and success, these two men have a beautiful heart for people! What an impactful night of music we have planned for ‘Good Friday.’”

Last fall, Chris joined Tyler and Brian on stage during their CAN’T SAY I AIN’T COUNTRY TOUR stop in Atlanta, Georgia for a powerful live collaboration of “How Great Is Our God.” Chris shared more on the friendship with People Magazine.

“We’ve experienced being on stage with Chris and it’s truly a God thing,” said Tyler. “Since then we’ve built a friendship and brotherhood with one of our musical heroes. We’re honored to stand with him and help lift up our Nashville community.” Added Brian, “we’ve been keeping our appearance at ‘Good Friday’ under wraps for a while now. It’s really going to be a powerful night.”

“And I can think of no one better suited to share a message of hope to a city and community in need over Easter weekend than our guest speaker and my friend, Max Lucado,” shared Chris. “Thank you, Max, for coming back a third time, always leading with love, and generously investing in this community.”

Chris has committed to host the yearly concerts indefinitely, currently holding Bridgestone through 2024, as every concert gives back to the community. ‘Good Friday Nashville’ is produced by Awakening Events and is presented by K-LOVE, Air1, The Fish and WAY-FM

About Chris Tomlin
Chris Tomlin is one of the most heralded singer-songwriters in the world who has amassed an impressive body of work. With 12 albums, 16 #1 radio singles, a Grammy and an American Music Award, 3 Billboard Music Awards, 21 Dove Awards, a BMI Songwriter of the Year Award with two platinum and five gold albums to his credit and over 8 million albums sold, Chris is among the most recognized and influential artists in any genre of music known around the world. It is estimated each week 20-30 million people sing one of his songs in worship and TIME magazine claimed he is the “most often sung artist in the world.” Chris is one of only four artists ever to receive the Sound Exchange Digital Radio Award for over 1 Billion digital radio streams, others include Justin Timberlake, Pitbull and Garth Brooks. Chris also became the first Christian artist to reach the Billion streams threshold on PANDORA and was presented with their BILLIONAIRE award. Chris’ concert tours have sold-out venues in major cities including New York City’s Madison Square Garden, The Forum in Los Angeles, Nashville’s Bridgestone Arena and Red Rocks, among others. In 2019 Chris released new music with Holy Roar: Live From Church album, Is He Worthy? EP and his first new Christmas music since 2015 with Christmas Day: Christmas Songs of Worship.

About Awakening Events
Awakening Events produces over 300 Contemporary Christian concerts and events nationwide in America and is consistently ranked in Pollstar’s “Worldwide – Top 50 Promoter” list each year, reaching as high as 9th in North America, and top 20 in the world. For more info visit: www.AwakeningEvents.com.