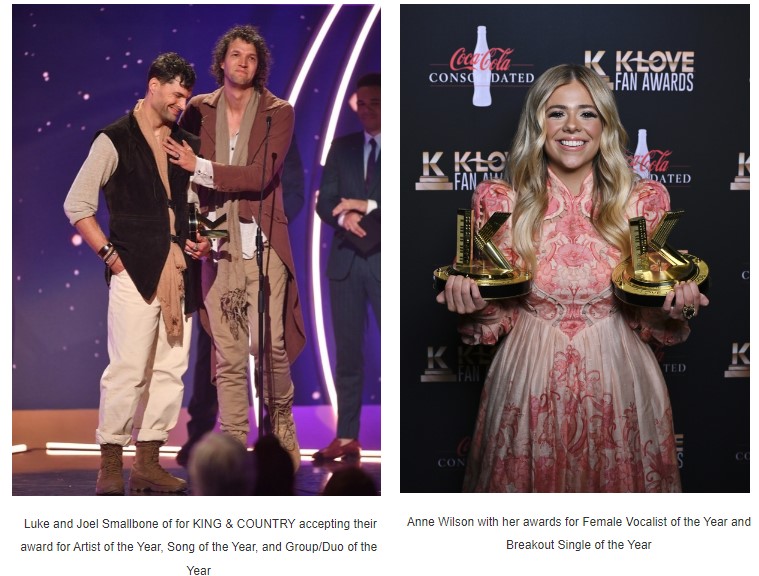 With a desire to also recognize mission-driven people and projects outside of music, “American Underdog” was named the Film Impact Winner; Tim Tebow was honored with the Sports Impact Award; and Michael W. Smith was given the Book Impact Award for his book, “The Way Of The Father.”

The award show capped a weekend of live and in-person, fan-focused events, including a songwriter’s showcase hosted by Steven Curtis Chapman, and a worship service with Brandon Lake, Pat Barrett and Phil Wickham.

Group/Duo Of The Year – for King & Country

Artist Of The Year – for King & Country

Book Impact – Michael W. Smith – “The Way Of The Father”

About The K-LOVE Fan Awards:
The K-LOVE Fan Awards mission is to create a fan experience that celebrates and promotes artists, athletes, authors and entertainers who, with excellence, engage and impact popular culture for Jesus Christ. This year’s show will be hosted Matthew West and Tauren Wells. The annual awards show is a John Sanders LLC production presented by Coca-Cola Consolidated.

About K-LOVE:
K-LOVE creates compelling media designed to inspire and encourage people to develop a meaningful relationship with Christ. K-LOVE is listener-supported and delivers Christian music through its almost 600 signals across 50 states, the K-LOVE App, smart devices, klove.com, and K-LOVE On Demand offering positive and encouraging music