Nashville, Tenn. (Jun. 4, 2021) – for KING & COUNTRY and Zach Williams scored double wins during tonight’s broadcast of the fan-fueled K-LOVE Fan Awards. Taped live and in person in front of a capacity crowd at Nashville’s iconic Grand Ole Opry House, Artist of the Year and Group of the Year went to for KING & COUNTRY, as Zach Williams was named Male Artist of the Year and received the Song of the Year award for his duet with Dolly Parton, “There Was Jesus.” Other winners included Michael W. Smith’s first K-LOVE Fan Award nomination and win for Worship Song of the Year (“Waymaker”) and newcomers CAIN for Breakout Single of the Year (“Rise Up”). The eighth annual show, sponsored by Coca-Cola Consolidated, was broadcast by TBN this evening and is now streaming on the TBN app. The K-LOVE Fan Awards Weekend, culminating with the award show, was the largest event at the Gaylord Opryland Resort post-COVID.

Centering around the awards’ mission to also recognize mission-driven people and projects outside of the music community, “The Chosen” was named the Film Impact Winner; Scott Drew, Head Coach of Baylor’s National Championship Men’s Basketball team, was honored with the Sports Impact Award; Skillet lead vocalist John Cooper was given the Book Impact Award for his debut book, Awake and Alive to Truth. 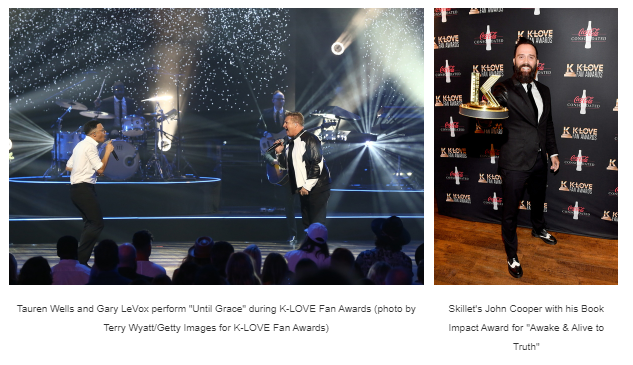 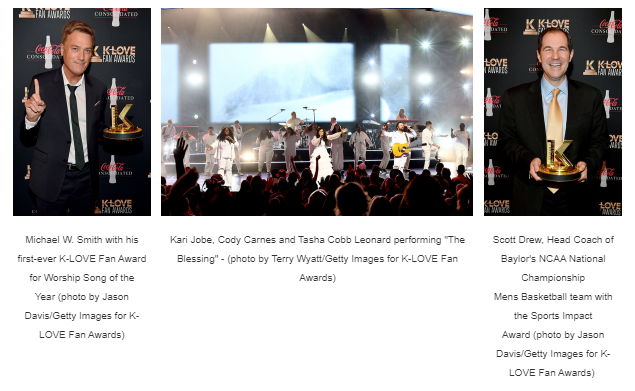 The award show capped a weekend of live and in-person, fan-focused events, the first in Nashville since March 2020, including a songwriter’s showcase hosted by Steven Curtis Chapman, and a worship service with Natalie Grant and Charlotte Gambill, all at the Gaylord Opryland Hotel.

Song of the Year
Zach Williams & Dolly Parton “There Was Jesus”

Artist of the Year
for KING & COUNTRY

About the K-LOVE Fan Awards:
The K-LOVE Fan Awards mission is to create a fan experience that celebrates and promotes artists, athletes, authors and entertainers who, with excellence, engage and impact popular culture for Jesus Christ. This year’s show will be hosted Matthew West. The annual awards show is a John Sanders LLC production presented by Coca-Cola Consolidated.

About K-LOVE:
K-LOVE creates compelling media designed to inspire and encourage people to develop a meaningful relationship with Christ. K-LOVE is listener-supported and delivers Christian music through its almost 600 signals across 50 states, the K-LOVE App, smart devices, klove.com, and K-LOVE On-Demand offering positive and encouraging music

About the Trinity Broadcasting Network:
Trinity Broadcasting Network is the world’s largest and most watched faith-and-family broadcaster, reaching over 175 nations across the earth with inspirational and entertaining programming 24 hours a day in 14 languages and on 32 global networks. As the world’s most influential non-profit religious broadcaster, TBN has led the way in expanding the impact of faith-based television across the earth through the creation of innovative content designed to reach every viewer demographic with the life-changing message of hope and grace. To find out more about the TBN Networks, visit us at tbn.org.