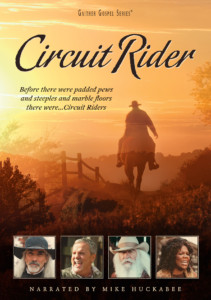 NASHVILLE, Tenn.—October 27th, 2016—Gaither Music Group has just released an all-new docu-musical experience on DVD and CD featuring some of the most well-known talents from the Gaither HOMECOMING stage.

It’s hard to imagine, sitting in our modern-day mega churches, that there was a time when towns had no church buildings.  And if they did have a small building for church services, they often had no local pastor to speak of.  Enter the Circuit Rider, usually on a weary horse straddling saddlebags that carried his hymnbook, Bible and a few personal items.

Circuit Rider, created by Suzanne Jennings and Woody Wright, is the real-life account of the spiritual formation of a nation and the church we have today shaped in part by the dedication and vision of these circuit riders.  These musical performances and readings, sung and read by some of the most well-loved gospel artists, tell the story of these preachers who blazed the trail to share the gospel of Jesus with people of every race and nationality living in little towns and settlements across the nation.  These brave men and women, from every denomination and creed, understood the meaning of perseverance and sacrifice.  Their stories are not often told, but they are as much a part of the American landscape as Mt. Rushmore and the Grand Canyon.

“I had been a Baptist boy all of my life when I attended two Wesleyan congregations in Nashville,” recalls co-creator Woody Wright.  “I read a few books to study up on the theological differences.  When I began to look at the history of where the different church groups came from, I began to read the autobiography of Peter Cartwright and I could not stop.  His colorful detail of life as a circuit-riding preacher in the 1800s left me spellbound.

“I sent a copy of the book to my songwriting partner Suzanne Jennings, and after she read it I asked her if she would like to ‘tinker’ with the idea of a concept recording spotlighting those early, equestrian, Bible-toting preachers.  I was thrilled when she said she would, and she began writing incredible lyrics.  Her imagery dictated every melody I put to them.  So we started recording….”

“We had such a wealth of artistry to draw from,” stated Suzanne.  “I’m familiar with all of these people, and I’m familiar with some of the things they’ve been through over the years, so I had certain people in mind for specific songs.  It was interesting to match that up and then watch them bring their own experience to it.  We later decided to hook it all together by using excerpts and actual quotes from some of the circuit riders, chronicling their own stories.  So all of the pieces except for the introduction are from the people who actually lived this life.”

“Suzanne and Barry Jennings (president of Gaither Music Group) had been listening to the project,” recalls Wright, “and Barry thought we should enhance this concept CD with a video piece.  In an impossible dream we had said it COULD be a video someday, maybe, or a musical, or a performance piece, or something.  So when I got the call that the video crew was booked and that all the artists agreed to come shoot the video, it felt surreal.  And the location was amazing!  The process of selecting and adding a narrator and editing brought a whole new respect from me for the art of filmmaking.”

Gaither Music Group brought in the acclaimed Michael Merriman to direct the filmmaking, and he and Stephanie Reeves produced the LIVE performances taped at Fiddler’s Grove Historic Village in Lebanon, Tennessee.  Suzanne and Michael Nolen teamed up for the screenwriting.

“My hope for the viewer is that they will find it uplifting, historically interesting and, to be honest, maybe even a little convicting,” stated Suzanne.  “When Woody originally called me to talk about doing this project he said, ‘How many of us today sitting in our padded pews all over America would be willing to do something that drastic?’  To be a circuit-riding preacher took dedication and perseverance; it took suffering and sacrifice.  Their stories inspire me as a believer and cause me to reevaluate what I can do for the cause of Christ.  They gave us a strong history to live up to.”

Circuit Rider is exclusively distributed by Capitol Christian Distribution and is available throughout general market stores and the Christian marketplace in addition to online retailers including iTunes, Amazon and www.gaither.com.

To enjoy a promotional video from the DVD, visit:
https://www.youtube.com/watch?v=k25VjtnWsOc