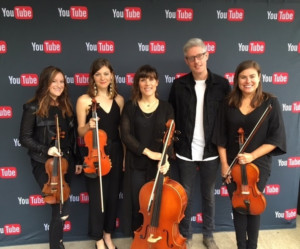 NASHVILLE, TENN. (June 16, 2016) Eight-time GRAMMY-nominated artist Matt Maher recently participated in the YouTube Pop-Up Space event in Nashville at Black River Entertainment. As part of the event, YouTube created the video for Maher’s latest radio single, “Abide With Me.” Click below to view this beautiful rendition of his song.

YouTube has been creating “pop-up” spaces around the world including New York City and Los Angeles to allow creators to craft new content and be in an environment where songwriters feel creative. These special spaces capture what the essence of YouTube is about – allowing the artist to create unique content. “Abide With Me” is from Matt’s GRAMMY-nominated album Saints and Sinners and is the current radio single. He shares about the inspiration behind the song:

“I’ve always been inspired by hymns. One hymn that has recently spoken to me is the old hymn, ‘Abide With Me.’ The writer, Henry Francis Lyte, was an Anglican vicar, who composed the song while suffering through tuberculosis at the age of 54. What a powerful witness to faith, in the resurrection of Christ. In a time where the frailty of human life is made evident every day on the news, we cling to the reality that God understands our suffering because of the loneliness, isolation, and painful suffering he felt from the Garden of Gethsemane through Calvary to a empty grave. There is always hope as we cling to the God who loves us.”

Maher will be performing in Krakow, Poland this summer at multiple events associated with World Youth Day, which is a worldwide gathering with Pope Francis open to all young people who desire a pilgrimage to encounter Jesus Christ alongside their contemporaries. In between World Youth Day and headlining fairs and festivals this summer, Maher will also participate in Chris Tomlin’s Worship Night in America events taking place in New York City, Denver, Miami and Chicago. This fall he will head on tour with label mates Casting Crowns – click here for the complete list of dates.