Nashville, TN (October 2, 2019) — Z2 Comics is launching multi-platinum rock band Skillet’s New York Comic Con (NYCC) debut in a big way in support of their brand new, best-selling graphic novel, EDEN: A Skillet Graphic Novel. The New York based publisher began collaborating with musicians to create graphic novels centered on unique stories and exclusive music in 2016, and with the release of EDEN in late August, the book is on the fast track to becoming Z2’s best selling book of all time. 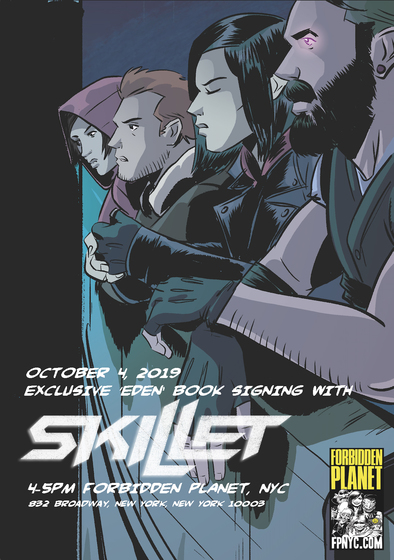 First up at #NYCC, fans can catch Skillet on the SyFy Wire Live Stage, Friday, October 4th at 12:15 p.m. EST or stream online http://www.syfy.com/nycc or https://www.youtube.com/syfywire.

That afternoon, one of the world’s most acclaimed sellers of comics, graphic novels, toys and other collectibles since 1981, NYC’s Forbidden Planet, will host Skillet for a signing at 4pm EST. This rare opportunity to meet the band is open to all Skillet fans, with or without a New York Comic Con badge. RSVP to the event here.

In addition to #NYCC news, Skillet’s current rock track “Legendary” has been tapped as the official theme song for WWE’s “RAW” on USA Network. To see the exclusive live footage shot by WWE, click here.

In support of their latest top selling project VICTORIOUS, Skillet also just kicked off the VICTORIOUS SKY tour, a 21-city trek with Alter Bridge, running through October 25th. November 6 marks a European headlining jaunt through the remainder of the year, much of which is already sold out, including stops in London, Paris, Hamburg and Budapest. For tickets and more tour information, please visit: www.Skillet.com/tour.

About Skillet:
One of the best-selling rock bands of the 21st century, two-time GRAMMY® Award-nominated, Pandora Billionaires Club recipients, multiplatinum Wisconsin quartet Skillet—John Cooper [lead vocals/bass], Korey Cooper [guitar/keys], Jen Ledger [drums/vocals], and Seth Morrison [lead guitar]—write the soundtrack to triumph. An undying spirit humbly asserted and affirmed the band as one of this generation’s most successful rock acts. However, as all classic underdog stories do, it happened quietly under the radar. By 2019, they not only garnered a pair of GRAMMY® Award nods and sold over 12 million albums worldwide, but they also took home a Billboard Music Award for the double-platinum Awake. Its breakout single “Monster” remains “one of the most-streamed rock songs of all-time” with 285 Million global audio streams. 2016’s Unleashed bowed at #3 on the Billboard Top 200. Going #1 on Rock Radio, the lead single “Feel Invincible” cracked 150 million global audio streams and went platinum. Meanwhile, the gold-certified Unleashed became their fourth consecutive album to receive either a gold, platinum, or double-platinum. To date, nine original tunes earned RIAA recognition in tandem with high-profile syncs by everyone from WWE and Marvel to ESPN and NFL. Between selling out arenas on four continents, the group performed on CONAN and graced the pages of USA Today and New York Times, to name a few. In 2018 alone, the band clocked 1 billion streams. This momentum continues on their 2019 tenth full-length, Victorious. With the bulk produced by Korey and John, it lives up to its name for Skillet as their most triumphant body of work yet.

About Z2 Comics:
Z2 Comics have made a name for themselves releasing quality graphic novels in to the marketplace since 2012. In 2016, Z2 began collaborating with musicians to create graphic novels centered on unique stories and exclusive music. That ideal led them to work with the likes of Dan Auerbach (The Black Keys), DJ Paul Oakenfold, jazz trumpeter Dave Chisholm and others. 2018 marked another landmark year as Z2 partnered with Japanese metal band BABYMETAL on Apocrypha: The Legend Of BabyMetal, which is one of the biggest selling graphic novels Z2 has released. With the upcoming release of Andy Biersack’s The Ghost Of Ohio in 2019 and other soon-to-be-named partnerships, Z2 Comics continues to push the envelope with their music and comics integrations.