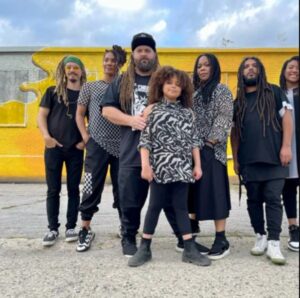 Reggae Icons CHRISTAFARI Bringing Hope To All 50 States This Year

When the global pandemic curbed their normal international touring, the band stepped out in faith with a focus on bringing our nation back under God.

LOS ANGELES, CA — Chart-topping Reggae pioneers CHRISTAFARI has toured full time for over three decades, taking their Gospel-infused world music to 25-30 nations on 5 continents annually. But everything changed with COVID-19 travel limitations. So at the beginning of 2021, the group felt the Lord calling them to tour the nation that needs it the most — the United States of America — with the goal of bringing the hope of Christ to all 50 states within one year. They will wrap their tour in February, 12 months after first hitting the road, having performed over 300 dates in all 50 states plus Washington, D.C.

“We knew that God was calling us with a sense of urgency to bring hope to our nation, so we left California and decided to drive by faith with only 4 shows confirmed,” said CHRISTAFARI founder Mark Mohr. “We trusted in Jehovah Jireh with a brazen faith and He delivered every step of the way! We’ve never toured this heavy, ever, in the history of the band.”

Since its inception in 1989, CHRISTAFARI has ministered in over 85 nations, witnessing more than 700,000 people commit their lives to Christ. “Our goal as a ministry is to reach the lost at any cost,” says Mohr. This means holding free outdoor concerts, homeless outreaches, and ministering in drug and alcohol rehabilitation centers and churches of all ethnic and economic backgrounds. “At every single show, we make a clear call to salvation and we have already seen thousands of people in the U.S. alone raise their hands to give their lives to Christ!”

“Living on the road as full-time missionaries has made our band more than familiar with the call to be content daily,” says Mohr. “We have faced hurricanes, tornadoes, tropical storms, theft, tire blowouts, and so much more. Incessant touring means many team members are away from their families for extremely long periods of time, but it’s all worth it as we’ve seen God move in mighty ways both on the road and back at home. We’ve seen lives forever changed, and we’ve experienced His provision every single step of the way.”

While in Alaska, the band filmed their latest music video, “Jireh” — the 100th music video of their career which is available on their official YouTube channel that receives 2 million views monthly and growing. “Jireh” is CHRISTAFARI’s reggae cover of the mega-hit by Elevation Worship and Maverick City. The music video accumulated over 300,000 views the first week and it’s climbing quickly.

“It’s like lightning in a bottle,” says Mohr. “Similar to our version of ‘Hosanna,’ which now has 20 million views, it was a last-minute addition to the album and a gift that keeps on giving. The fact that it is our 100th official music video just makes this even sweeter!”

CHRISTAFARI released their latest studio album, Under God (Lion of Zion Entertainment), in June of 2021.

The band was founded in Los Angeles, CA by Mark Mohr in 1989. Avion Blackman joined as vocalist and bassist in 2003 shortly after she met Mohr in her home country of Trinidad and Tobago. CHRISTAFARI continues to be a dominating force in world music, with six albums debuting at #1 on the Billboard Reggae Albums Chart since 2012. After three decades, the Reggae pioneers are the all-time top-selling Gospel Reggae act worldwide. The legendary group has performed in all 50 states, over 85 nations, at two Olympic Games, and at a Presidential Inauguration in Washington, D.C. The band has performed at most major Reggae and Gospel/CCM festivals with the top artists in the genres, and they’ve had the privilege of performing at many of the country’s most prestigious venues such as L.A.’s Greek Theater, Dodger Stadium, and the steps of the United States Capitol before a crowd of 500,000. The band has been featured on The 700 Club, CNN, MTV, MTV Brazil, ABC, TBN, JUCE TV, BET, TBS, and many more. Their music is even featured in the current curriculum taught at Carnegie Hall. The band’s popular YouTube channel receives millions of views monthly and continues to grow.