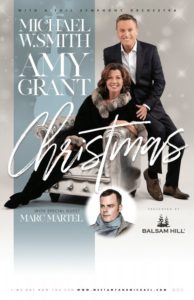 Nashville, Tenn. (Jul. 15, 2019) – Multi-platinum, GRAMMY® winners Amy Grant and Michael W. Smith are reuniting to co-bill their popular Christmas tour this upcoming holiday season, where they will be joined by special guest Marc Martel. Incorporating a full symphony orchestra at each performance, this musical mastery is being presented by Balsam Hill®. Kicking off November 30 in Cincinnati, OH the seven-city tour travels to Columbus, OH, Indianapolis, IN, Grand Rapids, MI and more.

The highly anticipated show will feature selections spanning the artists’ expansive Christmas repertoires and combine the vast collection of critically-acclaimed holiday albums between them. The dynamic duo last brought their Christmas tour on the road in 2017 to the delight of fans in sold-out shows throughout North America.

“Michael is one is the most gifted musicians I know. His welcoming, easygoing personality makes me look forward to every chance I have to share the stage with him…. especially at Christmas,” Grant says.

Smith states, “It’s no secret how much I love Christmas and playing Christmas music. I’m so looking forward to being back out with Amy for the first half of the season – and when she returns home for her Christmas residency at the Ryman – I look forward to carrying on for nine more shows with my band and the amazing Marc Martel!”

Grant and Smith both agreed, “We are so happy to have Balsam Hill as our Tour Sponsor again. A Christmas Tour sponsored by the manufacturer of the most beautiful Christmas trees and Christmas decorations; it just doesn’t get any better than that! Both of our homes are decorated with Balsam Hill products.”

“It all comes full circle! Amy Grant and Michael W. Smith – two class acts, whose music has been a big part of my own musical upbringing – have invited me to join them on their 2019 Christmas tour. As far as I’m concerned, when it comes to Christmas shows, this one is the standard. So excited to share the stage with Smitty and Amy, and see you all somewhere on the road this holiday season,” Martel adds.

In addition to the performance, and in support of their longstanding relationship with Compassion International, Michael and Amy are exclusively meeting fans who sponsor a child through the organization prior to the concerts through the website www.meetamyandmichael.com and www.meetmichaelwsmith.com. This “Compassion Meet & Greet” is an opportunity to learn more about the Compassion International’s child sponsorship experience and will include a photo and Meet & Greet opportunity with the artists. (Tickets to each concert must be purchased separately through the event’s normal ticketing outlets.) All three artists are also participating in the Sixth Annual Balsam Hill Celebrities for Smiles Charity Auction, where the public can bid on one-of-a-kind, celebrity-autographed, beautiful holiday ornaments on an eBay auction at www.CelebritiesforSmiles.com. All proceeds will benefit Operation Smile, an international medical charity that offers free cleft lip and cleft palate surgeries to children and young adults all around the world.

Following the seven-city run with Grant, Smith will continue the Christmas tour with Martel for nine dates hitting Nashville, TN, Atlanta, GA, Detroit, MI, and more. He will be accompanied by the full symphony orchestra on select dates as well. Meanwhile, Grant will return to Nashville for her Christmas at the Ryman residency with her husband Vince Gill. The 12-date holiday concert run will kick off on December 11 at Nashville’s famed Ryman Auditorium and close on December 23. This year’s Ryman residency offers matinee times of the couple’s holiday show on December 15, 22 and 23. Tickets are on sale and available via ryman.com, ticketmaster.com or by phone at 800-745-3000.

For more information on the upcoming tour and to purchase tickets, visit: AmyGrant.com/Tour and MichaelWSmith.com/Tour

2019 Christmas Tour Dates:
All dates and venues are subject to change without notice 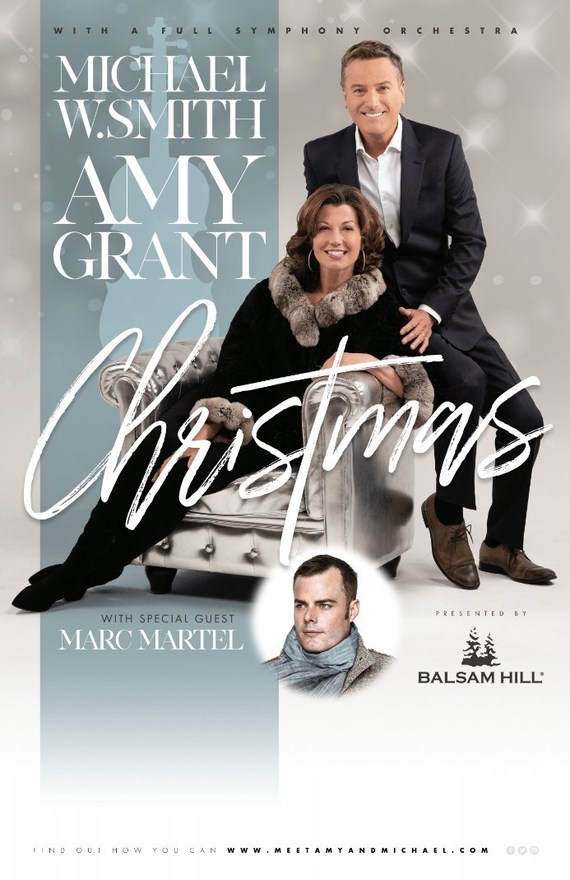 About Amy Grant:
Amy Grant’s career spans more than 30 years and stretches from her roots in gospel into becoming an iconic pop star, songwriter, television personality and philanthropist. With three multi-platinum albums, six platinum albums and four gold albums, her total career album sales have exceeded 30 million. Grant’s chart success has been consistent throughout her career with six No. 1 hits, 10 Top 40 pop singles, 17 Top 40 Adult Contemporary tracks and multiple Contemporary Christian chart-toppers. In addition to her six GRAMMY® Awards, Grant has earned 26 Dove Awards (including four Artist of the Year Awards) and has been awarded a star on the Hollywood Walk of Fame as well as the Music City Walk of Fame. Conventional wisdom has it that Grant put Contemporary Christian Music on the map becoming the first Contemporary Christian artist to have a platinum record, the first to hit No. 1 on the Pop charts and the first to perform at the GRAMMY® Awards. With that, her legacy as one of the most influential artists of the past four decades is assured. In April of 2016, Grant celebrated the 25th anniversary of her iconic hit “Baby Baby” with a worldwide release of the song featuring pop sensation Tori Kelly. Tennessee Christmas released in late 2016, marking Grant’s first all-new holiday album in nearly 20 years.

About Michael W. Smith:
Michael W. Smith has been releasing new music regularly and performing around the world to sold-out crowds for the last 35+ years. During his storied career, he’s written over 35 #1 songs, been honored with three GRAMMY® Awards and 45 Dove Awards, one American Music Award, was inducted into the Gospel Music Hall of Fame and has sold more than 15 million albums. His most recent USA Today, Yahoo! Music and Billboard-acclaimed studio album A Million Lights and Parade, Good Morning America-featured and GRAMMY nominated live worship album Surrounded have together become his 30th and 31st Top 10 hits on Billboard’s Top Christian Albums chart, more than any other solo artist in history. He’s also given back to the global community. Smith has raised funds to battle AIDS in Africa; started Rocketown, a safe haven for young people in Tennessee to meet and find hope; and has helped more than 70,000 children through Compassion International. He has also written several bestselling books, including Old Enough To Know and Friends Are Friends Forever. Michael W. Smith’s heavily praised Michael W. Smith & Friends: The Spirit of Christmas features collaborations with Vince Gill, Lady Antebellum, Little Big Town, Martina McBride, Carrie Underwood, Jennifer Nettles, Bono, Michael McDonald and Grant. For more information, visit www.michaelwsmith.com.

About Marc Martel:
Long before his YouTube videos went viral, spawning an appearance on “The Ellen DeGeneres Show” and a performance with the surviving members of Queen on “American Idol,” Marc Martel spent 13 years recording and touring the globe with Canadian rockers Downhere. After hearing about a contest spearheaded by the actual members of Queen, the front man almost passed on the opportunity to enter, but with some prodding, he casually cut a version of “Somebody To Love” in 2011, and now 30 million cumulative YouTube and Facebook views later, Martel was declared the victor. Fast forward to 2019, and Martel has forged for himself a unique and diverse career. Amongst other accolades, he started his own Queen tribute show called The Ultimate Queen Celebration, which tours all over the world, including an upcoming Germany/Austria/Switzerland run in 2020. In 2018 Martel was called upon to be one of the voices of Freddie Mercury in the Twentieth Century Fox film, “Bohemian Rhapsody”, which has not only opened up touring opportunities that have brought him all over playing to sold out crowds, but has led to features by the New York Times, Good Morning America, and hundreds of other publications.

About Balsam Brands
The flagship brand of Redwood City-headquartered Balsam Brands is Balsam Hill, renowned worldwide for its superbly crafted, lifelike Christmas Trees inspired by nature. Its exclusive True Needle™ Technology is modeled after real evergreen branches to beautifully replicate nature’s design. Not only known for being life-like, Balsam Hill’s patented technology including Flip Tree™, Instant Evergreen™, Candelight™ LED and Easy Plug™ make assembly easier than ever.
The company was founded in 2006 by Thomas Harman, who was inspired to start Balsam Hill by a family member who was allergic to live trees but still wanted to create a festive atmosphere in his home during the holidays. When Thomas’ search for a lifelike artificial Christmas tree came up empty-handed, he created Balsam Hill to make highly realistic artificial trees.

Today, Balsam Hill creates inspired home décor for all seasons and occasions, including realistic artificial florals that capture the beauty of spring. As a community leader, Balsam Brands engages in a variety of civic activities that help strengthen families and support those in need.

About Compassion International:
Founded in 1952, Compassion International is a Christian child development organization that works to release children from poverty in Jesus’ name. Compassion revolutionized the fight against global poverty by working exclusively with the Church to lift children out of spiritual, economic, social and physical poverty. Compassion partners with more than 7,500 churches in 25 countries to deliver its holistic child development program to over 2 million babies, children and young adults. Its child sponsorship program has been validated through independent, empirical research.