Tour News: Announcing Tenth Avenue North’s Over And Underneath The Tenth Anniversary Tour With Special Guests We Are Messengers 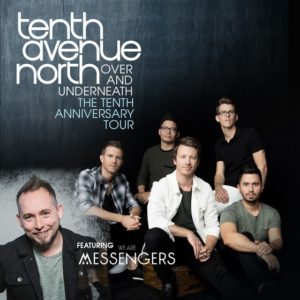 NASHVILLE, TENN. (February 23, 2018) With 1.5 million album sales, multiple No. 1 radio hits and more than 20 national and international tours over the last ten years, Tenth Avenue North is celebrating the release of their label debut album Over and Underneath. The Over and Underneath The Tenth Anniversary Tour with special guests We Are Messengers will feature the band performing the entire album in its entirety this April and May. Released in 2008, this RIAA gold certified album produced hits such as “By Your Side” and “Love Is Here,” which helped launch their career. See the tour dates listed below.

The band’s current single “Control” is continuing to hold the No. 1 spot on multiple charts including – Billboard Christian Airplay, Billboard AC, MediaBase Audience Chart and Mediabase AC Monitored. Tenth Avenue North is on the road for the MercyMe -Tenth Avenue North Live tour until the beginning of April.

By Kelly Meade|2018-02-24T18:44:06-05:00February 23rd, 2018|News|Comments Off on Tour News: Announcing Tenth Avenue North’s Over And Underneath The Tenth Anniversary Tour With Special Guests We Are Messengers