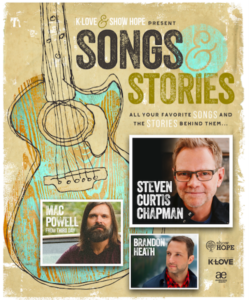 STEVEN CURTIS CHAPMAN WILL KICK OFF HIS THIRD “SONGS & STORIES” TOUR THIS FALL,
WILL BE JOINED BY MAC POWELL AND BRANDON HEATH;
The Tour Is Presented By K-LOVE And Show Hope And In Partnership With Awakening Events

(Nashville, Tenn) 13 July 2016 – It was five years ago when Steven Curtis Chapman debuted his “Songs & Stories” Tour, which became one of his most successful tours ever with sold-out crowds across the country. This fall, he will take the anticipated show back on out the road for its third run and will be joined by Mac Powell from THIRD DAY and Brandon Heath. The 20-city “Songs & Stories” 2016 tour, presented by Show Hope and for the first time by K-LOVE and in partnership with Awakening Events, will kick off on September 15 in Philadelphia and wrap October 16 in Jacksonville, FL.

“In 2011 I had a chance to put together this unique tour experience and it would prove to be one of my most memorable and special tours ever,” explains Steven Curtis Chapman. “Those who know me know that I love to tell stories with my music – behind every great song is often an equally great story. I’m very excited to announce that I’m creating that experience again for this fall, and two of the best songwriters I know will be joining me – Mac Powell from THIRD DAY and Brandon Heath! We hope you’ll join us for what we plan to be an unforgettable night.”

Each evening of the tour, Chapman, Powell and Heath will perform some of their favorite songs, along with fan favorites, in a unique songwriting atmosphere. They will also share many of the powerful stories that have come as a result of these songs.

Mac Powell shares, “I can’t tell you how excited I am to be on the stories and songs tour. I get to share more insight into some of my songs in a way they haven’t been shared before. Secondly, to be able to share the stage once again with two of my favorite singer/songwriter’s in the business – Brandon Heath and Steven Curtis Chapman – will be amazing. You may have seen us in concert before, but never like this!”

“I’m excited to share the stage with two of my music heroes,” exclaims Brandon Heath. “I’ve gotta really up my game on the Stories and Songs tour – these guys have major songwriting muscle and I’m the grunt of the bunch.”

The most updated tour information can be found at StevenCurtisChapman.com and KLOVE.com/events.

*all dates subject to change.

ABOUT STEVEN CURTIS CHAPMAN: In a career that has spanned 30 years, Steven Curtis Chapman is the most awarded artist in Christian music history with 58 Gospel Music Association Dove Awards, five GRAMMYs®, an American Music Award, 48 No. 1 singles, selling more than eleven million albums and with eight RIAA-certified gold or platinum albums to his credit. He has been on “Good Morning America,” “CBS Sunday Morning,” CNN, MSNBC, “60 Minutes,” E! Entertainment, “The Today Show,” “Fox & Friends,” “CBS This Morning,” and “The Tonight Show,” Glenn Beck’s “The Blaze,” along with appearing in the pages of People, Billboard, Parents Magazine, and more. A vocal supporter of adoption, Chapman, along with his wife Mary Beth, founded Show Hope in 2003, a nonprofit organization that helps restore the hope of a family to orphans.

With countless tours under his belt, Chapman continues on the road this year performing at numerous festivals and events, as well as kicking off the second leg of the highly successful SCC3D: THIRD DAY Together with Steven Curtis Chapman Tour this August. Chapman’s latest project, Worship And Believe (Essential Worship) released in the spring of 2016. For further information, please visit www.StevenCurtisChapman.com.

ABOUT MAC POWELL: Mac Powell’s Southern-drenched vocals have been a cornerstone of THIRD DAY, one of contemporary Christian music’s most successful groups, for the past three decades. Mac’s music career has seen many milestones including 32 No. 1 singles, 10+ million albums sold, 24 GMA Dove Awards, four GRAMMY® Awards, an American Music Award, a Georgia Music Hall of Fame Induction, and multiple ASCAP awards for songwriting including its coveted Vanguard award. In recent years, Mac has released two critically acclaimed country albums (Mac Powell and Southpaw). Mac’s entrance into country music has offered him the opportunity to pen country songs with some of country music’s biggest names, such as Kristian Bush of Sugarland, Travis Tritt, Darius Rucker, and The Band Perry. Mac has a heart for humanitarian work and has been involved in many philanthropic endeavors, including The Come Together Fund, a 501(c)3 he started with his bandmates in THIRD DAY. The Come Together Fund has donated relief funds to many U.S. and worldwide charities and started The Gateway School for impoverished children in India. With the support of their fans, over 50,000+ children have been sponsored in need across the globe by partnering with organizations such as World Vision, Food for the Hungry and others. Mac, his wife and their five children live outside of Atlanta, GA. www.MacPowell.com.

ABOUT BRANDON HEATH: Since Brandon Heath’s 2006 debut album, Don’t Get Comfortable, with Reunion Records, he has become one of Christian music’s most beloved and respected artists and songwriters. Heath has garnered an Emmy Award, five GRAMMY® nominations and an American Music Award nomination. He has been honored as a six-time GMA Dove Award recipient, including “Male Vocalist of the Year” (2009 and 2010), BMI’s 2014 Songwriter of the Year, and earned multiple additional songwriting honors. His award-winning songs and signature vocals reflect a soaring radio career that includes top hits “I’m Not Who I Was,” “Wait and See,” the 2009 GMA Dove Award-winning Song of the Year and RIAA Platinum certified single “Give Me Your Eyes,” the eight-week chart topper “Your Love,” “The Light In Me,” and many others.

Heath, a Nashville native, first began writing at age 13. His artistry and ability to connect with audiences have compelled countless media outlets across the nation to platform his story and music. Highlights include coverage in The New York Times, Billboard, The Wall Street Journal, Relevant, CBS Evening News and The Discovery Channel, and as a presenter on the 54th Annual GRAMMY Awards. www.BrandonHeath.net.