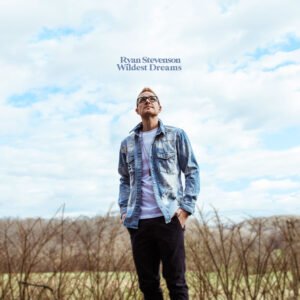 “Over the last couple of years, I feel like I’ve been learning to rest more, and not worry so much about what may or may not happen in the future,” shares Ryan Stevenson about the idea behind the new album. “In the beginning, I tended to operate out of a posture to ‘obtain’ success; then over time, I morphed into a posture of trying to ‘maintain’ success. Trying to micromanage and ‘maintain’ success is exhausting and is a thief of joy and peace. This last season has been an eye opener; in the way of realizing how good God is all the time. The title of this new record is so appropriate, because I truly feel like at every turn, God continues to blow my mind and come through in ways that I never thought were possible. His goodness and blessing, even in the midst of my chaos, is so humbling. My wife and I reflect regularly on our journey, and where the Lord has brought us on this journey. It really is better than our wildest dreams.”

Wildest Dreams is a collection of songs that will inspire the listener to move to a place of trust and dependence on God. In addition to honoring his mother on the album (“When We Fall Apart”), Stevenson also wrote a song for his dad, “With Your Life,” where he wanted him to know that he now realizes how much his dad loved him as he reflects on his own life with two boys. There is also an impactful a song, “Through It All,” that touches on secrets and how debilitating the shame and pressure of our sin can be if not brought into light. He also brings his fun-upbeat melodies to the project with the nostalgic song, “My 90s.”

Stevenson kicked off his year with the release of the new radio single, “Amadeo (Still My God),” which is currently a Top 25 Billboard Christian radio song with airplay on more than 73 AC stations including the K-LOVE network, SiriusXM’s “The Message” and the Way-FM network. In just 2 months the song has already amassed over 3.5 million streams across AmazonMusic, AppleMusic, Pandora, Spotify & YouTube. There is also a new Amadeo 5-day devotional available on the YouVersion Bible app written by Stevenson.

During this unprecedented season with limited travel, Stevenson will be doing a live online “Amadeo Radio Tour” with virtual performances across the country beginning today with K-LOVE Radio. The schedule and links for the performances listed below.

Stevenson will also release his first book, “Eye of the Storm: Experiencing God When You Can’t See Him,” this summer. “Ryan is deeply committed to the honesty of the journey,” says Paul Young, author of “The Shack.” “I am honored to be a witness to his courage and determination and his wholehearted pursuit of authentic truth-telling and creative craft.” The book will release July 7 through Harvest House and is available for pre-order now. “Ryan’s story is captivating and unique—nothing short of miraculous!” says Bart Millard of MercyMe. “I loved reading about his journey and seeing the Lord’s hand on his life. This is a beautifully compelling story, and I’m excited to see what the future holds for him.”

ABOUT RYAN STEVENSON: Following a nine-year stint as a paramedic, Pacific Northwest native Ryan Stevenson signed an exclusive agreement with Gotee Records in 2013 after capturing TobyMac’s attention by co-writing the No. 1 and GRAMMY® nominated single “Speak Life.” His first recording for the label was the Holding Nothing Back EP in 2013. This was followed by 2015’s full-length album Fresh Start, which featured the RIAA Gold Certified® single “Eye of the Storm.”. No. 1 for 16 total weeks in 2016, including nine weeks at Billboard’s Christian Airplay/Audience, “Eye of the Storm” was also at the top for 14 consecutive weeks on Billboard’s Christian AC chart, and listed as the No. 2 Billboard Christian AC song that same year. The song also won a Dove Award for Christian Pop Contemporary Song of the Year in 2017, and was nominated for two 2017 K-LOVE Fan Awards as well as a 2017 Billboard Music Award for “Top Christian Song.”

In 2018 album he released No Matter What, which featured collaborations with Bart Millard of MercyMe and Amy Grant, along with the top single “With Lifted Hands,” which became his fourth consecutive top 10  Billboard Christian Airplay single.

With five No. 1 singles (three as an artist and two as a co-writer), a GRAMMY® nomination, Billboard Music Award nomination, a Dove Award (2017), ASCAP honors and major tour bills with the likes of TobyMac, MercyMe, Newsboys, and Matt Maher, among others, Ryan Stevenson has already distinguished himself as a rare talent whose unique perspective guides his honest lyrics and sonic sensibilities. RyanStevensonMusic.com.