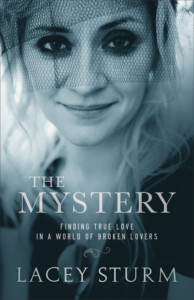 Nashville, Tenn. (August 18, 2016) — Following the 2014 release of Lacey Sturm’s widely praised debut book, “The Reason”, Sturm has announced another deeply personal memoir, “The Mystery: Finding True Love In A World Of Broken Lovers.” Releasing October 4 from Baker Books, the book touches on the topics of love, relationships, divorce, depression and suicide, inspired by Sturm’s own experiences.

In “The Mystery,” Sturm guides readers through her own journey and struggles – from childhood through her current marriage – providing personal insight into love and relationships. Reaching out to those who have learned to define love through their own wrecked relationships, shattered romances and dysfunctional families, Sturm offers new, healthy ways to think about and pursue love.

As former lead singer of platinum-selling international rock band Flyleaf, Sturm continues her musical success with her debut solo project Life Screams, which released February 12, hitting the No. 1 spot on Billboard’s Top Hard Rock Albums chart. Fans can catch Sturm live as she tours the country in support of the album. For additional information, click here.

About Lacey Sturm
In 2002, Lacey Sturm co-founded Flyleaf and led the rock band to international success as its frontwoman. The band’s single “All Around Me” went platinum, soaring to the top 40 on the Billboard Hot 100 chart and earning recognition as an award-winning song at the 2009 BMI Pop Awards. “All Around Me” was one of many successful Flyleaf songs as numerous other singles landed on Billboard’s Alternative, Rock and Christian charts. Sturm left Flyleaf in 2012 to focus on a solo career and has had success outside of the rock band, including performing on Third Day’s single, “Born Again,” which received GRAMMY® nominations for Best Gospel Song and Best Gospel Performance, and which Billboard acclaimed Sturm’s vocal performance to be “gorgeous.” Sturm’s song “Heavy Prey” featuring Geno Lenardo appeared on the soundtrack for the 2012 major motion picture “Underworld: Awakening.” Sturm now uses her influence to speak out to others about her life-changing faith, involved in both The Whosoevers and RESET movements. Following her debut as an author with “The Reason,” Sturm is set to release her second book, “The Mystery” on October 4.