Book News: PLUMB Releases Second Book FIGHT FOR HER…Even If You Have to Fight Her 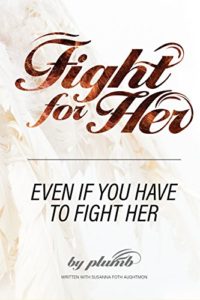 PLUMB Releases Second Book:
FIGHT FOR HER…Even if You Have to Fight Her
Artist Announces Upcoming Tour to Support New Album that Features the Title Track to BEAUTIFULLY BROKEN Film.

Nashville, TN – Prolific multi-genre recording artist PLUMB continues to inspire and empower with the release of her sophomore book FIGHT FOR HER…Even if You Have To Fight Her.

FIGHT FOR HER is a moving challenge to fight for each other – even if that means fighting with each other. Our relationships can often be messy, but when we challenge and support each other with love and grace, lives are transformed.

“Originally I planned to write a book for mothers and daughters, but as I started working on the book, it hit me that ALL women are daughters, whether they ever become a mother or not,” Plumb explains. “We need to be reminded that we are all sons and daughters of God and we have been and will continue to be fought for…regardless of our earthly experience with the parents we have or haven’t had.”

Drawn from the generational lessons of both being and having a daughter, PLUMB explores fundamental questions everyone, especially females, face with depth and levity. Her sense of humor and down-to-earth style draw us to hold on to Jesus and each other with full hearts, as we strive for the best for each other. With thoughtful questions at the end of each chapter, FIGHT FOR HER offers an empowering, encouraging and enriching read, both as a stand-alone book or small group discussion.

She continues, “I wrote the book from my perspective as a woman to challenge the way we, as women, communicate with each other; however, the sentiment resonates with men equally. Often ‘fighting for’ can look like ‘fighting with’, and ‘standing up for’ can be interpreted as ‘standing up to’. I hope FIGHT FOR HER begins a revolution of people committed to fighting for, supporting, and challenging each other to be all we were created to be, by communicating the truth of what God says about us, to us, in love.  Sometimes, that is telling someone who thinks or feels unworthy how beautiful and valuable they truly are. And sometimes it means telling them no.”

FIGHT FOR HER comes on the heels of the BEAUTIFULLY BROKEN album, written simultaneously, that released in June. The book and album speak to one another as PLUMB continues her commitment to sharing transparent, personal stories that remind us that we are all broken, we are not alone, and we are all loved fiercely by God who can powerfully restore us in ways we could never imagine.

Following the themes of the book and album, PLUMB has just launched a playful Alice in Wonderland inspired video for the album’s title track. It serves as a reminder that, much like a teacup, we are all beautiful and valuable, but easily broken.  PLUMB shares, “No matter how broken we are, it doesn’t change who we belong to, our beauty, our value, or how He loves us.  No matter what we have done or what has been done to us, we are still His. He wants us to give Him that brokenness, the chips and breaks, the pain and sadness, to advance His kingdom. He invites us to celebrate how we are all His children. That ultimately is all that matters. Being His. Being beautiful. Even in our brokenness.”

The “Beautifully Broken” video can be viewed here: http://plumbmusic.net/beautifully-broken-official-music-video/

The title track is also the theme song for the film Beautifully Broken, just released in theaters on August 24.