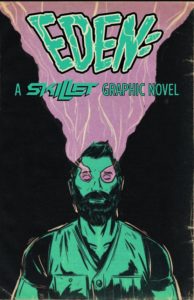 Nashville, Tenn. (Mar. 05, 2019) – Coming on the heels of Apocrypha: The Legend Of BabyMetal and the upcoming The Ghost Of Ohio graphic novel, Z2 Comics is pleased to announce their next title is a collaborative partnership with multi-platinum, GRAMMY-nominated rockers Skillet. Eden: A Skillet Graphic Novel is based on an original story idea created by Skillet frontman John Cooper alongside the creative team of Z2 Comics: Josh Frankel and Sridhar Reddy. Writers Alex Paknadel and Dan Watters of Random Shock Studios are writing the comic with Cooper. Artist Chris Hunt created the cover and will be working on the pages of the comic scheduled for release late Summer 2019. 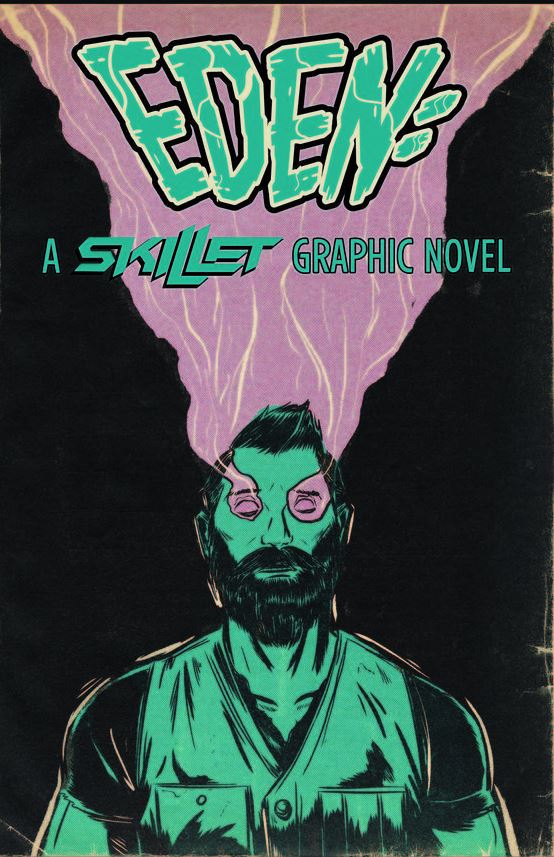 “I am beyond thrilled about ‘Eden.’ It has always been a dream of mine to create a comic. Comics are still an important part of my life today and I can now share that love with my children with the release of this book. In many ways, this graphic novel is a natural extension of Skillet’s career. It is about perseverance, unlikely heroes, and faith in what you believe. I hope that the fans love it!” exclaims John Cooper of Skillet.

“We are very excited to join forces with John Cooper and the entire Skillet team to create Eden. This unique story idea and John’s innate love of comics made this a natural partnership for us. We can’t wait to share this with the world. This further cements Z2 Comics’ reputation as the premier home for artists, musicians and their exclusive graphic novel projects,” states Josh Frankel, CEO of Z2 Comics.

The story of Eden: A Skillet Graphic Novel follows the two main characters of John and Korey (based on the real life Coopers). To save their family and town they must uncover the mystery of what lies behind the dreams of a prophecy that threaten to consume them. They set out on a quest that will take them through the barren wastelands and gleaming cities of a near-future Tennessee. Bandmates Seth Morrison and Jen Ledger are also focal characters in the story about survival, determination and strength of personal beliefs. Fans can go to http://bit.ly/SkilletGN to pre-order the standard edition of Eden: A Skillet Graphic Novel or https://www.z2comics.com/ for more information. A deluxe edition of Eden: A Skillet Graphic Novel, available for $99.99 and limited to 1000 copies, is autographed by John Cooper and comes in a large, coffee table bound edition with four exclusive prints (seen below). The deluxe edition can be ordered at: http://bit.ly/skilletGN.

About Z2 Comics: Z2 Comics have made a name for themselves releasing quality graphic novels in to the marketplace since 2012. In 2016, Z2 began collaborating with musicians to create graphic novels centered on unique stories and exclusive music. That ideal led them to work with the likes of Dan Auerbach (The Black Keys), DJ Paul Oakenfold, jazz trumpeter Dave Chisholm and others. 2018 marked another landmark year as Z2 partnered with Japanese metal band BABYMETAL on Apocrypha: The Legend Of BabyMetal, which is one of the biggest selling graphic novels Z2 has released. With the upcoming release of Andy Biersack’s The Ghost Of Ohio in 2019 and other soon-to-be-named partnerships, Z2 Comics continues to push the envelope with their music and comics integrations.

About Skillet: Skillet has cemented their place as one of the 21st century’s most successful rock bands. Selling more than 12 million units worldwide, the Wisconsin quartet have received two GRAMMY® Award nominations and won a Billboard Music Award for the now double-platinum certified Awake. Their double-platinum single “Monster” was “the eighth most-streamed rock song of 2015” and currently has over 111 million plays (and counting) on Spotify, earning the distinction of becoming “the best-selling digital single in the history of Christian Music.” 2013’s Rise bowed at #4 on the Billboard Top 200 upon release and received resounding and eclectic acclaim from the likes of USA Today, New York Times, Revolver Loudwire and more. Their latest album, Unleashed, debuted at #3 on the Billboard 200 and the first single “Feel Invincible” went to #1 on the Rock Radio chart. The track “Stars” was featured in the motion picture The Shack, released last March. Skillet was recently nominated for 3 additional Billboard Music Awards and their songs have been used by the WWE, Marvel, ESPN and the NFL to name a few.