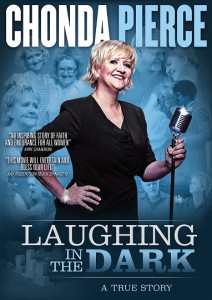 NASHVILLE, Tenn.—With sellouts in more than 125 theatres around the country last fall for its one-night Fathom Events and Fuesic Entertainment presentation, “Chonda Pierce: Laughing in the Dark” is set to debut on DVD April 5 from Sony Pictures.

A deeply personal glimpse into the life of the groundbreaking Christian humorist and best-selling female comedian of all time, “Chonda Pierce: Laughing in the Dark” chronicles a series of tragic circumstances in Pierce’s life, including the loss of her husband. Persevering with her signature wit always intact, Pierce hopes to inspire and encourage others with her story.

In addition to the critically acclaimed 83-minute feature presentation, the DVD is highlighted by more than two hours of bonus material, including the complete interview with Pierce and her late husband, David; a Q&A hosted by Pierce with such notable film and television personalities as Roma Downey, Sherri Shepherd, Miss Kay Robertson, and Kevin & Sam Sorbo, among others; “What Now?” a post-film conversation with director Rick Altizer and Pierce; and a video tribute to the comedian and her fans, among other features.

The #1 per screen average in ticket sales for October 27, 2015, “Chonda Pierce: Laughing in the Dark” returned to the big screen for an encore showing last year and has drawn rave reviews from Pierce’s fans and fellow entertainers. Actor and producer Kirk Cameron calls the film “an inspiring story of faith and endurance for all women,” while “Duck Dynasty’s” Miss Kay Robertson says, “this movie will entertain and bless your life.”

In conjunction with the DVD, Pierce is also slated to release “Laughing in the Dark: A Bible Study on the Book of Job.” The companion study for personal or small group use was written by Pierce and Dale McCleskey (Beth Moore, Priscilla Shirer) and draws parallels from her life’s circumstances—and the experiences of women everywhere—to Job’s struggles and abiding faith. The “Chonda Pierce: Laughing in the Dark” DVD includes several special clips for use with the Bible study.

Chonda Pierce has been making people laugh for more than two decades with her winning combination of fierce wit and southern charm. The Recording Industry Association of America’s (RIAA) best-selling female comedian of all time, Pierce has earned five Daytime Emmy® Award nominations, performs in countless churches around the country each year, and is ranked among Pollstar’s top-selling live performers with six Platinum DVDs and three Gold DVDs to her credit.