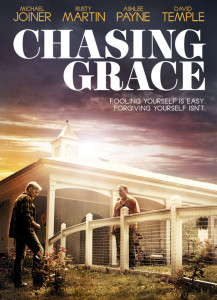 CHASING GRACE SET TO RELEASE TO DVD TUESDAY, MAY 3 WITH WORD FILMS;
Directed, Executive Produced, Starred And Written By David Temple,
Chasing Grace Brings Attention To The Power Of Forgiveness

NASHVILLE, TENN – 28 March 2016 – The faith-based drama, Chasing Grace, is set to release to DVD May 3 with Word Films (Captive, Noble and Adrenaline). Adapted from the novel Discovering Grace, the film was directed, executive produced, starred and written by David Temple (The Last Passport, The Confession).

Starring Michael Joiner (The Grace Card), Rusty Martin (Courageous) and Ashlee Payne (Red Dirt Rising), Chasing Grace touches on a painful tragedy that brings to light the story of great redemption and forgiveness. “The story, at its core, is about forgiveness,” explains creator David Temple. “It’s something we all need and an act we need to show other every day. However, the message is even more about grace. Grace is an act of forgiveness, or an act of understanding that is given when it’s often least expected. These days, I believe that we should all strive to practice more grace and more forgiveness.”

The Dove Foundation, the organization that encourages and promotes wholesome family entertainment, has already given Chasing Grace four out of five doves, while stating, “The likeable Mathesons are portrayed as a normal family, trying to cope and realizing that their faith in God is what they need to cling to. Chasing Grace is more about grace chasing us… and finding us.”

Chasing Grace is loosely based upon true events from David Temple’s past, which helped made the story and characters feel more real than other faith-based films. “My hope for this film is to challenge the way viewers see and understand grace,” shares Temple. “We should consider that we’re not expected to be perfect; we simply need to show more grace. For in the spirit of forgiveness can we see genuine love.”

Click here or on the image below to see the trailer for this powerful film.

ABOUT WORD FILMS:
Word Films is a branch from Word Entertainment, the leader in the music industry for more than 60 years, which is a unique and comprehensive entertainment company comprised of multi-faceted artist service departments including publishing, merchandising, booking and online initiatives. Word Films has provided their audience with many family-friendly films such as the Hallmark Original Series When Calls The Heart, Kirk Cameron’s Monumental, Noble, Adrenaline, This Is Winter Jam and many more.