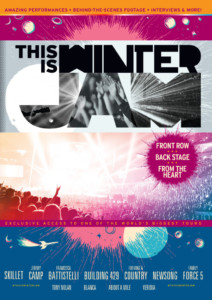 ‘THIS IS WINTER JAM’ BRINGS
BLOCKBUSTER TOUR TO DVD JUNE 7

NASHVILLE, Tenn.—Following its one-night debut in more than 500 theaters around the country earlier this spring, “This Is Winter Jam” comes home to DVD June 7 from Word Films. Featuring unforgettable performances from Skillet, for KING & COUNTRY, Jeremy Camp, Francesca Battistelli, NewSong, Building 429 and Family Force 5, among others, the 90-minute documentary offers an exclusive, behind-the-scenes look at one of the world’s biggest tours.

Directed by Nathan Corrona, “This Is Winter Jam” showcases  the heartbeat of the annual Winter Jam Tour Spectacular, which has seen thousands of lives transformed by the power of the Gospel for more than 20 years. The film traces the tour’s beginning as a single concert in South Carolina in 1995 to the blockbuster event it has become, now hitting major arenas in more than 50 cities across the country each year.

In addition to candid interviews with tour artists (past and present), fans and crewmembers, “This Is Winter Jam” showcases such memorable moments as road pastor Bobby Joiner’s life-changing encounter with a venue security guard and an exclusive look at “Jam Church,” the intimate backstage worship service held each Sunday. In keeping with the mission of Winter Jam, tour evangelist Tony Nolan offers a direct presentation of the Gospel to close the film.

“We are honored to partner with Winter Jam in bringing their powerful story and ministry to the world in a new way with the release of ‘This is Winter Jam,’” shares Rod Riley, President & CEO, Word Entertainment. “Beyond the incredible performances from the biggest names in Christian music, this film gives current and new fans a compelling glimpse into the lives of the artists backstage, along with the heart and steadfast mission of the tour.”

Created and hosted by GRAMMY®-nominated NewSong, the annual Winter Jam Tour Spectacular exploded from a single show in 1995 to the world’s #1 first-quarter tour for four consecutive years, according to Pollstar. Throughout two decades, Winter Jam has helped provide a powerful platform for the Gospel in major arenas nationwide, consistently showcasing Christian music’s brightest stars, including TobyMac, Skillet, Newsboys, Lecrae, Hillsong United, Kari Jobe and many others. Last year Winter Jam played to more than 700,000 people across the country, shattering the tour’s previous attendance records. For more information, visit jamtour.com.

“This Is Winter Jam” retails for $14.98 and is distributed by Word Films. For further information, visit wordfilms.com or turningpointpr.com.