Home/News/Film News: CGI-Animated Feature THE PILGRIM’S PROGRESS to Stream Free of Charge August 25 and 26
Previous Next

THE PILGRIM’S PROGRESS Continues Reaching New Audiences Around the Globe.
In the U.S., Film to Broadcast Online Free of Charge on August 25th and 26th

McKinney, TX — Since it’s debut in American theaters over Easter 2019, the computer-animated feature film THE PILGRIM’S PROGRESS has been celebrated by audiences around the world, in a variety of languages. Now, ahead of it’s home video release, Revelation Media and Cat in the Mill Studios are offering viewers to watch the film free of charge online, through the iDisciple/Christian Cinema platform. This free broadcast will only be available on August 25 and 26. Simply register at https://www.pilgrims.movie/live-event-201908/ to receive a link to screen the film. 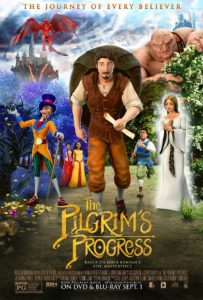 This is the story’s feature-length theatrical debut, as well as the first computer-animated telling of the timeless tale. Media-driven families have already experienced firsthand that this centuries-old story can still connect with viewers of all ages.

Upon it’s debut through Fathom Events, the film ranked as the #1 per-screen average in theaters on opening night – April 18. Also on Easter weekend, the film was aired on the 6th largest television network in Iran, reaching over 5 million homes in their native Farsi.

In the following months, THE PILGRIM’S PROGRESS found to sell-out crowds in Australia, South Africa, and in South Korea. The Korean language screening of the film sold over 500,000 tickets, with encore showings currently being scheduled.

In the US, the film continues to be shared in private screenings. To date, over 2,000 churches and organizations have created movie events surrounding the film since it’s church marketing release in June.

“Faith-based films have proven to be one of the most effective tools for reaching the world, and have the unique power to break down barriers of age, race, nationality, and language,” shares Executive Producer Steve Cleary. “With a classic, beloved story that is already known throughout the world like THE PILGRIM’S PROGRESS, we have been able to open up conversations about the Christian journey all around the globe in multiple languages. It’s amazing to watch God work, and we know that it’s just getting started.”

As a book, THE PILGRIM’S PROGRESS has been translated into over 200 languages, has never been out of print and has sold over 200 million copies – more copies than any Christian book, next to the Bible. Written in the late 1600s by John Bunyan while in prison for holding religious services, THE PILGRIM’S PROGRESS is often cited as the greatest allegory ever written.

Now, using CGI animation, THE PILGRIM’S PROGRESS is able to be re-voiced in multiple languages, breaking down barriers of illiteracy and cultural misunderstandings. Already the film has been completed in English, Farsi, Korean, Spanish, and is in production in Mandarin, Cantonese, Dutch, French, Russian, Hindi, Tamil, Vietnamese, Urdu, Arabic and other languages. The producers have a goal of translating the film into the world’s 100 top languages which would make it the most translated animated film of all time.

Steve continues, “The story’s timeless themes of the Christian faith – such as hope, persecution, persistence, doubt, hardships – are resonating with audiences in a whole new way.”

To register to watch the free event, please sign up at https://www.pilgrims.movie/