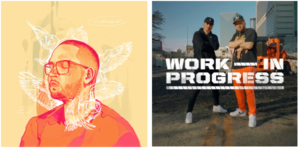 (Reach Records; Atlanta, GA; – May 16, 2019) — Today, rapper Andy Mineo releases his new music video for “Keepin It Movin” featuring Guvna B on his YouTube channel. Directed and edited by Pete Wall (Light Media), the video captures scenes from Andy’s 2018 European tour including the 2-hour challenge where Andy and Guvna B quickly recorded and shot the video for the song. Click here to watch the video.

“Keepin It Movin” featuring by Guvna B is the first single from Andy’s upcoming mixtape WORK IN PROGRESS, scheduled to be released on Friday, August 23rd. WORK IN PROGRESS is an 11 track mixtape comprised of raw, unmastered and alternate versions of songs recorded over the years. Fans can pre-order the new project and check out the premiere podcast episode of “Work In Progress” now by visiting andymineo.work.

About “Work In Progress: The Podcast”
Work In Progress is a new music podcast brought to you by rapper, Andy Mineo. Inspired by his upcoming mixtape, Andy and his co-host/manager Delgis Mustafa discuss the creative process, inspiration and themes behind his “lost files”. Featuring record label executives, artists, friends and even Andy’s wife, Cristina, as guests; Work In Progress openly explores major themes from his new music including: self-limiting systems, technical ability in rap, creative fear, broken family dynamics, Christianity in today’s political climate and more. New audio & video episodes will be released every three weeks on Fridays. andymineo.work