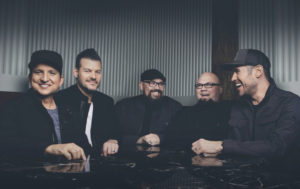 2 August 2019 – Nashville, Tenn – The new album that fans have been waiting for from Big Daddy Weave, When The Light Comes (Curb | Word Entertainment), is almost here. Officially releasing September 13, the project’s pre-order campaign begins today. With every advance order, two instant grat songs are immediately available for download, “I Know” and the album’s debut single, “Alive,” which is this week’s No. 1 song on multiple radio charts. The official lyric video for “I Know” is also available today, which can be viewed here or below.

Major plans are ahead in the coming months for Big Daddy Weave. They are performing many of the new songs as well as their previous hits and fan favorites on their headlining run of “The Alive Tour.” The first leg of the tour kicked off this past spring and is continuing across the country on its second leg now through November 24, 2019. The most updated tour schedule can be found here.

Additionally, Mike Weaver along with Jim Scherer, the band’s manager, penned the book I Am Redeemed (Hachette Book Group). Releasing September 3rd, the book is now available for pre-order. The band will also be featured in an upcoming reality series this fall. Further details will be announced.

The songs found on When the Light Comes all encompass a deep and personal faith in Jesus. Yet while it’s one thing to sing about trusting God in the midst of trials, the five members of Big Daddy Weave – Mike Weaver, Jay Weaver, Jeremy Redmon, Joe Shirk, and Brian Beihl – have each learned what it means to truly live by faith and to trust in a God who makes all things new.

As a band well-known for honest songs that tell personal stories of freedom in Christ, fans have long admired the group for their honesty and openness, such as “My Story,” “The Lion and the Lamb,” and “Redeemed,” cementing them as one of the most beloved bands in Christian music. But while creating the project, the group was working from an unfamiliar place, as the inspirational and uplifting themes found in the group’s music were desperately needed by the members themselves.

“When we were working on songs for this new record,” shares lead singer Mike Weaver, “they were all written from a place of processing grief and sorrow. We were in a season of serious hurting.” The list of trials the band was going through, especially over the past three years, was nearly overwhelming. Instead of avoiding the painful truth of their struggles, the band pushed themselves to put it all into the songs and an underlying current of rejoicing broke through. As bassist Jay Weaver puts it, “Only Jesus can turn sorrow into joy.”

Produced by the band’s guitarist Jeremy Redmon, When the Light Comes became a twelve-song collection of testimonies and joyous anthems, from the debut “Alive” that calls the listener forth to a brighter day and a faith that doesn’t disappoint, to “This Is What We Live For,” which speaks about the very real places we find ourselves, all the while proclaiming who God is and that He’s the one doing all that’s good in the world.

For more information, visit their website BigDaddyWeave.com and their social links below. 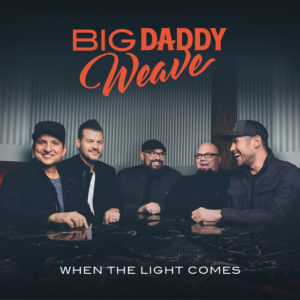 When The Light Comes song listing:
Alive
This Is What We Live For
Turn On The Light
I Know
What I’ve Got
The Name Of Jesus
I Want To Tell The World
Pursuit
Your Love Changes Everything
Walking In The Light Of Your Love
All Things New
Fly

ABOUT BIG DADDY WEAVE: Big Daddy Weave is one of Christian music’s most beloved artists. A mainstay at radio, the band has achieved multiple No. 1 singles, including “Alive,” “Love Come To Life,” “Redeemed,” “The Only Name (Yours Will Be),” “Overwhelmed” and “My Story.” RIAA Platinum-certified “Redeemed” became an anthem of unprecedented impact when it spent 11 weeks at No. 1, was dubbed “Song of the Year” at the first annual K-LOVE Fan Awards, and earned Dove Award and Billboard Music Award nominations. Their follow-up hit, “The Lion and The Lamb,” has become one of the genre’s most-streamed songs. Their current chart-topping single, “Alive,” currently holds more than six million on-demand streams, while the band’s song catalog has an astounding 285 million career on-demand streams.