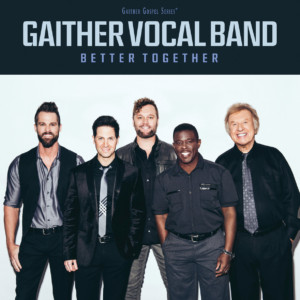 The quintet’s trend-setting harmonies breathe new life into gospel classics and American standards including “Working on a Building,” “Dig a Little Deeper,” “Didn’t It Rain,” “Led Out of Bondage” and more.  The newly-written title cut, penned by group founder and bass singer Bill Gaither, along with Reba Rambo-McGuire, Dony McGuire and Chip Davis, is a timeless anthem that celebrates the power of unity in an age of divisiveness.  Produced by Bill Gaither, group member and tenor David Phelps and Ben Isaacs (Jimmy Fortune, The Oak Ridge Boys), Better Together also features the group’s unique rendition of “You’ve Got a Friend,” a pop treasure previously performed by Carole King, James Taylor and others.

“This current line-up of voices is capable of doing about any style of music out there,” stated Gaither, “but we have stayed with the classics on this recording, and we are singing songs that have stood the test of time and will for many years to come.  And Gloria has done it once again.  She has created a moving lyric to the classical favorite ‘Aura Lee’ and it is very, very special.

“Our nation’s motto, which is printed on our currency, is E pluribus unum, which means ‘out of many, one.’  This is something we believe in as a group.  We each bring our part to create beautiful harmony, and we are truly better together than we are individually.”

For over three decades Gaither has been bringing together some of the most well-respected gospel music vocalists, creating the benchmark tradition of the renowned Gaither Vocal Band.  Members David Phelps, Wes Hampton, Todd Suttles, Adam Crabb and Gaither continue the group’s streak of award-winning line-ups, showcasing intricate vocal arrangements and intimate blends with this new release.

Creating unity with diverse talent has become a lifelong trademark for Gaither, who is a six-time GRAMMY® Award winner and a 41-time Gospel Music Association DOVE Award winner. He has hosted one of the largest concert tours in the Christian music industry for over two decades, joining the hands of artists, old and young, bridging generational gaps and varying musical preferences.

Better Together comes on the heels of the group’s Sometimes It Takes a Mountain and Happy Rhythm DVD releases, which debuted at the #1 and #2 spots respectively on the Music Video Sales chart according to Nielsen SoundScan.

The Gaither Vocal Band was awarded Southern Gospel Artist of the Year at the 2015 GMA DOVE Awards, and they were nominated for Best Roots Gospel Album at the 2015 GRAMMY® Awards.

Better Together will be featured in Homecoming Magazine, on gaither.com and on the Gaither YouTube channel, which garners over 15 million views monthly.  The recording will be distributed through Capitol Christian Distribution and will be available throughout general market stores and the Christian marketplace in addition to online retailers including iTunes, Amazon and www.gaither.com.

For a SNEAK PREVIEW of Better Together, visit: https://www.youtube.com/watch?v=zLie9ZzeqcQ

For further information regarding the Gaither Vocal Band, please visit www.gaither.com or connect on Facebook at www.facebook.com/gaithermusic or on Twitter: @Gaithermusic.

1.) Working on a Building

One of the most lauded and award-winning groups in gospel music garnering five GRAMMY® nominations, two GRAMMY® Awards and 18 DOVE Awards, these Gospel Music Association (GMA) Hall of Fame honorees continue to headline one of the largest tours in the field of Christian music annually; and their groundbreaking successes continue to raise the standard in male harmony. The group is comprised of Bill Gaither, David Phelps, Wes Hampton, Todd Suttles and Adam Crabb.

Courtesy of The Gaither Music Group