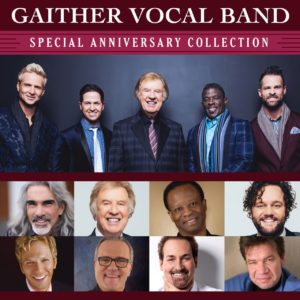 NASHVILLE, Tenn.—August 24th, 2018–Gospel Music Hall of Fame members and GRAMMY® Award winners the Gaither Vocal Band will release a new audio compilation today, in celebration of this year’s Gaither Vocal Band Reunion LIVE! concert event, scheduled to take place on October 19 and 20.  Special Anniversary Collection (Gaither Music Group) features some of the group’s most-requested hits and most-popular songs since the group recorded its signature two-disc set of hits in 2005. Fans will enjoy classic renditions of “He Touched Me,” “I Believe in a Hill Called Mt. Calvary,” “The Love of God,” “The Baptism of Jesse Taylor,” “Let Freedom Ring,” “Mary, Did You Know?” and more.

“I am so grateful to have had the opportunity of working with some of the greatest male vocalists ever in the field of gospel music,” stated group founder and vocalist Bill Gaither. “I take a lot of pride when I look at the pictures and see all of that talent. What can I say? I am blessed!”

Produced by famed country and gospel music performer and studio musician Gordon Mote, the We Have This Moment (Gaither Music Group) CD recording debuted at #1 on the Southern Gospel chart and at #4 on the CCM chart, according to Nielsen SoundScan. Its companion DVD, which released in October of last year, captures stage performances of 14 of the group’s recorded songs, including Gaither classics and some of today’s most popular worship songs of the church such as “Chain Breaker” and the group’s current top-charting radio single, “Jesus Messiah.”

The first radio single from the release, “Hallelujah Band,” which landed in the Top 5 on the national radio chart, highlights how these five unique voices and personalities have come together to create something special. Written by Becca Mizell and Sam Mizell, the up-tempo number was featured via social media as a performance video that has garnered over one million views on Facebook. The group’s follow-up video of “Chain Breaker” has received nearly three million Facebook views.

Special Anniversary Collection will be featured as part of a TV special airing on over 15 networks that carry the “Gaither Gospel Hour” weekly, including RFD-TV, DIRECTV, TBN, The Heartland Network, Dish TV, FamilyNet, CTN, GMTN, Guardian, Liberty, TCT, TLN and GaitherTV. It will air in Canada on Vision TV, The Miracle Channel, Grace TV and CTS. The recording is featured on www.gaither.com, in the Gaither Fall Catalog Collection, via the company’s social media properties and on the Gaither YouTube channel, which garners over 30 million views monthly.

Special Anniversary Collection is exclusively distributed by Capitol Christian Distribution and Universal Music and is available throughout general market stores and the Christian marketplace in addition to online retailers including iTunes, Apple Music, Amazon, CBD.com and Gaither.com.

One of the most lauded and award-winning groups in gospel music garnering six GRAMMY® nominations, two GRAMMY® Awards and 18 GMA DOVE Awards, these Gospel Music Association (GMA) Hall of Fame honorees continue to headline one of the largest tours in the field of Christian music annually; and their groundbreaking successes continue to raise the standard in male harmony. The group, which has sold over three million DVDs and CDs and performed at venues ranging from The Grand Ole Opry to Carnegie Hall, is currently comprised of Bill Gaither, Wes Hampton, Todd Suttles, Adam Crabb and Reggie Smith.